Nine years ago, at the end of my University days, I decided to go Interrailing around Europe during the summer holidays before I started teaching.  I’ve never actually scrapped about this trip before but the October Afternoon Boarding Pass range got me thinking about some of my past travels.  As I wanted to include quite a few pictures to show a range of the places that I visited, I decided again, to make some photostrips.  This time though, they are in a horizontal format. 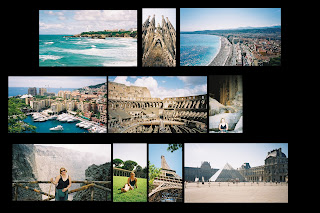 (this is what my collage looked like before I trimmed down into three strips)
I wanted to use maps to show the places that I visited.  I had the idea to fill in the gaps behind the negative strip sticker from the 12×12 October Afternoon Sticker sheet:

and from that I came up with the idea of combining this with images from Google Maps to show these locations in a timeline of my travels.

After printing out the maps, I trimmed them down to fit the spaces.

Once I had finished that element, the rest of the layout fell into place.  I misted the kraft card with some White, Sunshine and Barnwood Mister Huey mists so it didn’t look so stark.  Then I set about embellishing the page with the Boarding Pass and Jillibean Soup stickers (see previous post for supply list details). 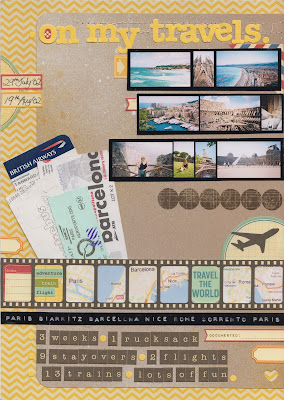 I tucked a selection of tickets that I had kept from some of the train journeys/flights that I made behind the frame strip.  I keep/collect all sorts of bits from trips but hardly ever use them on layouts: I must do that more often!

To echo this strip, I also used my Dymo machine to print out a strip of the placenames of the main stops that I made during my trip.

One of the last things that I did was to machine stitch two parallel lines at the top of the page.  I then  handstitched some vertical lines to join them at regular intervals to try to look like train tracks.  This gave me an area then, to anchor my title on.

If you do have a go at using photostrips, it would be great to see some of your examples.  Just leave a link in the comments box.