The Minc … All that glisters …

I’ll admit it – I’m a tool junkie. So when I read about the Minc gold foiling machine , I knew it was only going to be a matter of time before I succumbed. Something held me back though . I reckoned that you could achieve just as good results using a variety of homespun methods that ranged from Versamark, to glitter glue and everything in between. Having frittered away a lot to time, money and card stock in the last few weeks , I finally gave in to temptation and ordered it . AllI can say is … OMG !
Ok, so I’m now completely smitten and everything that comes within arm’s reach of my new Minc gets the gold treatment . The kitten had better watch out !
Remember those magic painting books you had as a child ? You’d swash a water-laden paintbrush across an unimpressive sheet of greyed out paper and lo and behold , just like magic , a rainbow of colour would appear before your eyes ( we were easily pleased back then ) . Well it’s like that only one thousand times more magical and then some. Once you’ve printed out your design on a laser printer , sandwiched it into the sleeve with a layer of whatever colour foil you want to use on top, fed it into the Minc … seconds later when you peel back the foil you get a moment of pure joy believe me ! I genuinely was bowled over by the clarity and detail.
I’ve put it to the test on a variety of materials and colours to show you what I mean.
My favourite choice of colour of card stock for foiling has got to be black . The contrast is wonderful . I chose a particularly striking image of a folk art Mexican skull. By this time my teenage boys were coming up with all kinds of things they wanted foiling – this one now hangs on eldest son’s bedroom wall. Apparently these Mexican skulls are bang on trend – pretty spooky but rather lovely in a weird kind of way ! 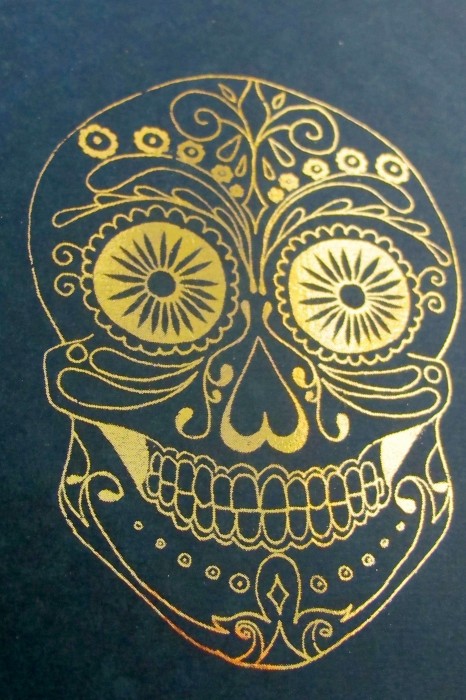 Woodgrain patterned paper looks as if it’s been gilded when it’s put through its paces too. 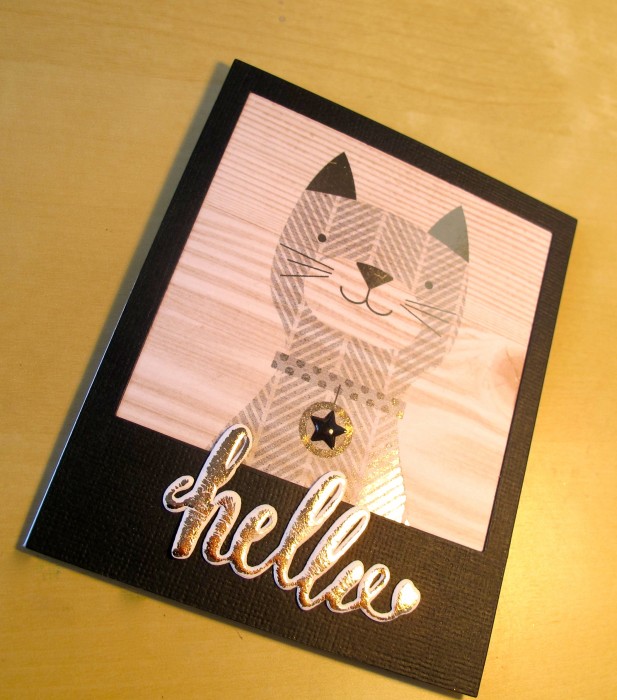 By now I’d gone completely bonkers and had started putting everything and anything through the machine . The word ‘hello’ is die cut in white funky foam that hadn’t even been through the printer but it still came out foiled once put through the machine and I rather liked the slightly distressed look it has. The cart is a cameo print which I could have also die -cut but I wanted to show it against the woodgrain patterned paper so printed it out uncut . If you have a Cameo Silhouette then the world suddenly becomes your oyster. Look out for Niki’s blog post later this month where she looks into that .
I bought a very cheap printer and was slightly concerned that it might not be up to the job but if it uses toner – you can’t go wrong. Although it only prints up to A4 size , I fed through sheets of paper that were 12″ long but only A4 in width to use on scrapbook pages like the one here … which has printed the t tile on vellum. 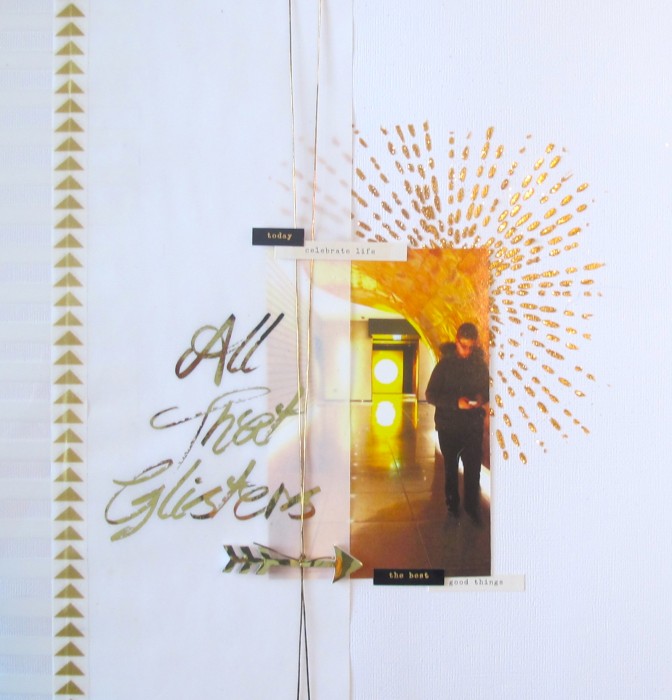 Vellum looks just wonderful when gilded and allows you to use a photo or image behind it on your page.

And finally a very simple card – I make heaps of these for all my students this time of year ( assuming they’re going to pass their exams ! )
For this a simply printed the word CONGRATULATIONS several times using a bold font ( Impact ) but before putting it through the Minc , I masked off the top 6 words revealing only one at the bottom which comes out foiled. One of the teeny Heidi Swapp mini gold clips at the top completes the look. 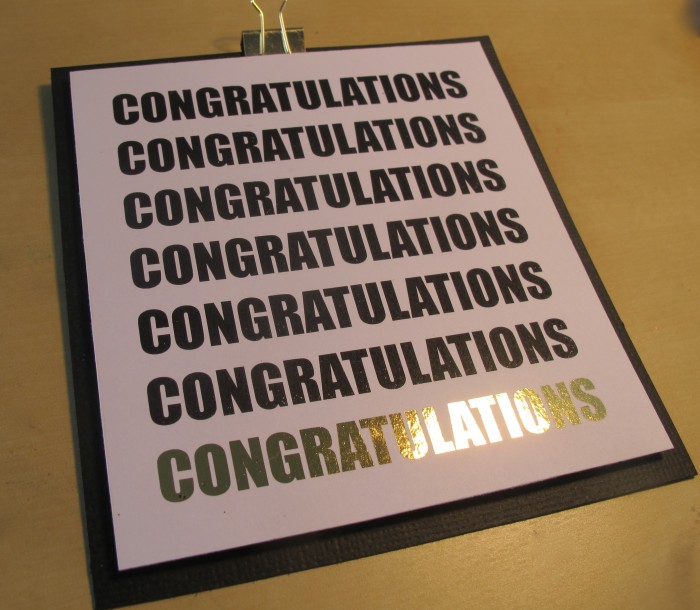 So far I’ve only used the sample of gold that comes with the machine and a roll of Rose Gold. I’m off to order some colours now too.
With apologies to Shakespeare … All that glisters really is gold !
Here’s what you need to get foiling …