Home   ›   Spinning round in circles!

Spinning round in circles!

Hey Magpies, I’m doing layouts with circles for July! I picked a random assortment of products this month and concentrated on using circles. So one of the first products I picked was these Elle’s Studio, Vellum Circles Sentiments. They’re such pretty colours and I love how the sentiment is cut out of the vellum. 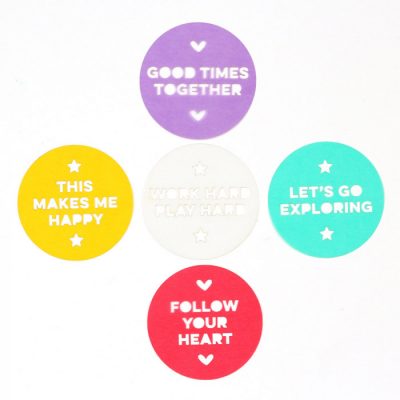 After my epic Nuvo post last month, I discovered something new for me this month! I drizzled the Nuvos around to make circles! It worked so well, I love it and will be doing this way more. I first drew a circle with my compas and then drizzled around it. I didn’t want a perfect circle so I stopped in various spots and let a bit more Nuvo drizzle out and then sped up in other places so the line would get thinner. It was so easy and I love the effect. I used my favourite colours, Caribbean Ocean, Carnation Pink and Dandelion Yellow. These are always my go to colours and I’ve been through multiple bottles of them.
I made a border with my favourite Maggie Holmes Carousel paper which is unfortunately sold out now cause I may have *ahem* bought all the sheets! I think if you find a perfect paper, stock up on it! Then I did the Black & White Nuvo border that I discovered last month around the edge of my white cardstock. I didn’t need to add too much to the LO after that, my title is a word from Shimelle’s Glitter Girl collection and the stars are from the same sheet of Thickers. The bow is from Maggie Holmes Carousel and I used the yellow circle from the Elle’s Studio Vellum Circle Sentiments pack. I’ve also dotted around some Elle’s Studio, Noteworthy Epoxy Stickers and Elle’s Studio Puffy Heart Stickers. 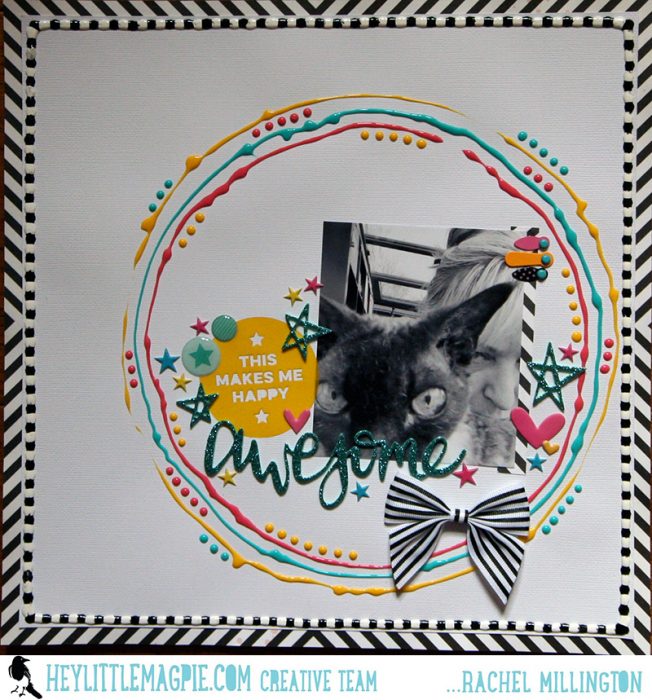 These Elle’s Studio, Noteworthy Epoxy Stickers are fab! I nearly used up my whole pack on these four layouts so I will be needing another packet! They would fit on every layout and have such usable words on them. You definitely need them in your stash! 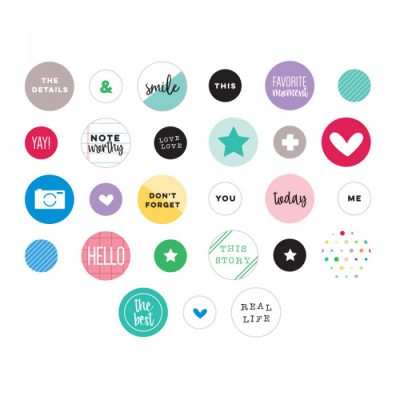 These Elle’s Studio, XOXO Hand Drawn Acrylic Hearts are so cool! I bought two packs and have almost used them up already! I love the shapes of them, the hand drawn look is a bit different and cool. 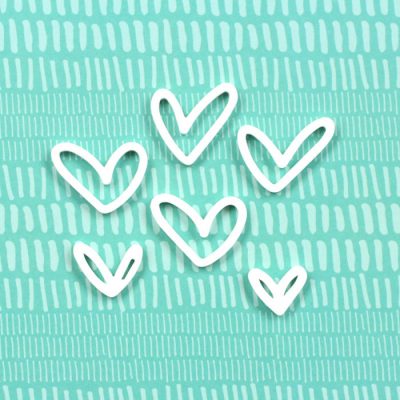 My next layout was a labour of love but what better way to do a circle on a LO than a sun? It did take me a few days to finish though! I started with a base sheet from the new Cocoa Vanilla, Boys Rule collection, the Good Times paper which has a grey sunburst on it. I cut the paper so the middle of the sun was off centre cause I didn’t want my photo in the centre of the paper. So I used some black spotty paper from my stash to make up the 12×12 again. Then I chose two papers to make my sun ‘rays’ with, Doodlebug, Sweet Summer Happy Hour and Cabana Stripe. I made a template ‘ray’ and just cut them all out. Then for some crazy reason I decided to ink all the edges and then distress them, this is what took all the time. I did plan to sew them on but I forgot that step!
I cut a circle of yellow cardstock to go behind my photo and then just embellished with hearts and circles. My title I did struggle with finding the right alphabets that would show up so I had to go digging in my stash to find the right ones. I love the effect of the big sun but man, it’s a commitment to make for sure! 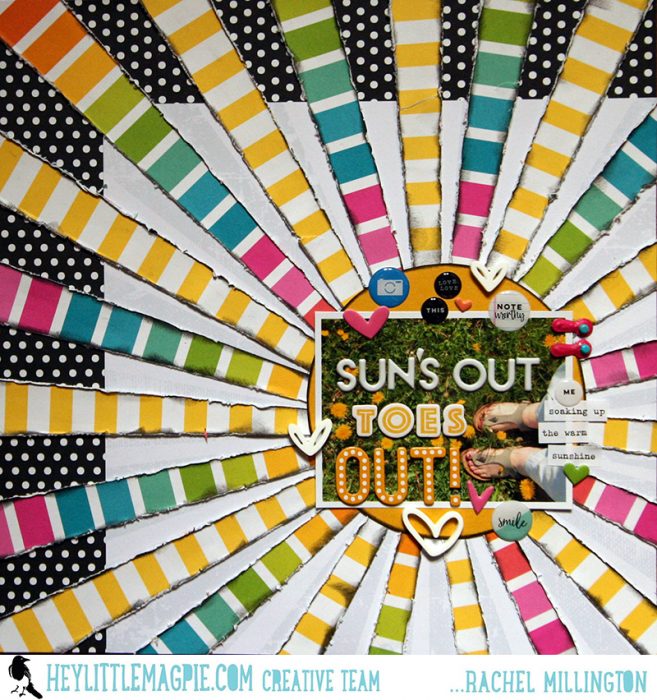 The Vicki Boutin, All the Good Things Die Cut Ephemera Icons is a great pack! I love all the flowers and leaves in the pack, they’re so colourful and usable! 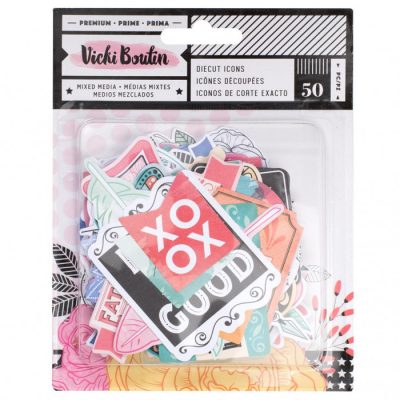 For this LO I dug out my paints, I used the Illustrated Faith I bought in the store ages ago, they’re such good paints, really thick and colourful. I used cheap foam brushes to paint a stripe down the middle of the page. My border is Shimelle, Glitter Girl, Fall in Line paper, another great border paper. I cut strips and angle the edges of 2 strips to make the border. Then I added a dotted Nuvo border using Caribbean Ocean, Rhubarb Crumble, English Mustard, Navy Blue and Violet Galaxy. Then I popped a photo on and started using up some of my Vicki Boutin, All the Good Things Ephemera Icons all over the place! I popped some on foam pads for dimension and then punched some circles from Shimelle, Glitter Girl 6×6 Paper Pad, added more Elle’s Studio Hand Drawn Acrylic Hearts, Elle’s Studio Puffy Heart Stickers and Elle’s Studio, Noteworthy Epoxy Stickers. 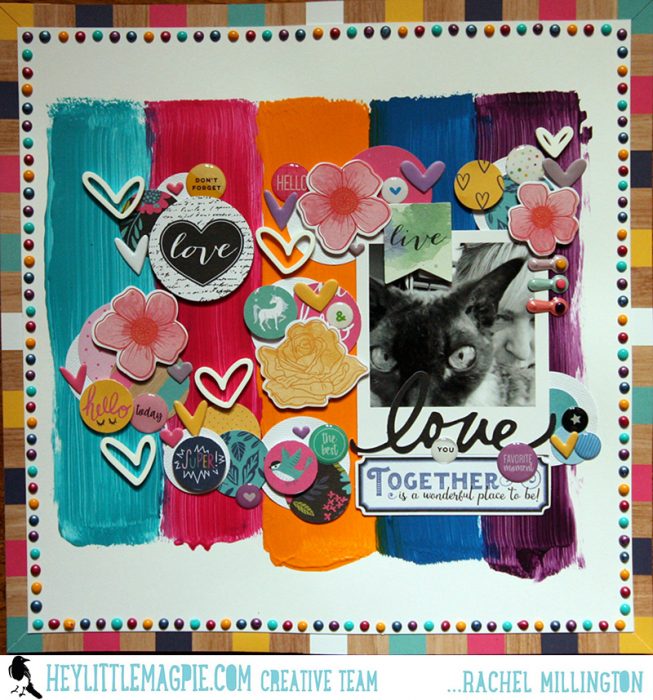 I really like these Elle’s Studio Wood Veneer Icons, Circles, Elle’s Studio seem to be really good at usable words or icons which is great. There’s nothing worse than being stuck with those icons/words you know you’ll never use in a billion years! 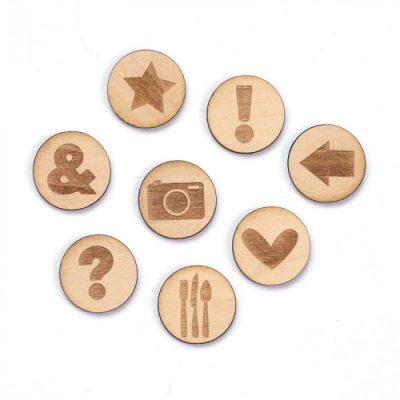 My last LO and I tried something else new with Nuvos. I got the crazy idea to try stamping with toilet rolls and it worked so well! I saved a few toilet rolls and had a go, it took me a few tries to get a background I liked but eventually I was satisfied. This is a bit of a messy look for me lol! All I did was squeeze the Nuvo around the edge of the toilet roll, it was so much easier than I expected it to be and worked well.  I also used a couple of bottle tops to get some slightly smaller circles down and then I dotted some extra dots around as well. I used loads of colours and tried to embrace the messy!
My title is a Bella Blvd Acrylic Word, Fabulous and I think I’ll be buying some more of these, so easy to use! I also dug out some older Thickers that were gold but I coloured them black with a Sharpie. Then I dotted around some embellishments, Elle’s Studio Wood Veneer Icons, Circles, Puffy Heart Stickers and Epoxy Stickers and then I journalled on a Pretty Little Studio XOXO Adore Circle Label and used a couple of word stickers from Elle’s Studio, Play All Day Phrase Stickers. 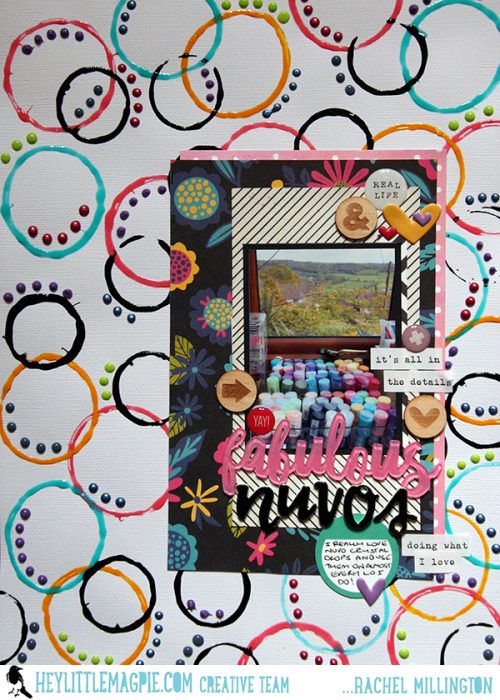 So I hope I’ve given you a couple of ideas for scrapping with circles and you guys should definitely try drizzling Nuvos around in a circle or stamping them with a toilet roll!

A sketch for summer