Hello Magpies, Amy here bringing you two wintery layouts using the Simple Stories collection called Winter Cottage. Featuring a muted colour scheme of deep red, navy and pine green, there are also pops of pale pink and blue. There is an abundance of cute animals such as bears and squirrels as well as wintery elements such as snow globes, snowmen, holly and winter warming clothes like jumpers and mittens. The collection also had a few Christmas elements such as stockings, wreaths, Christmas trees and presents. Its the perfect collection if you want to scrap both wintery photos and Christmas photos.

For my first layout I used the snowflake 6×6 stencil with two shades of blue ink, on top of a large circular mask. This created a central circle of mixed media snowflakes. I trimmed my white cardstock to 11.5″ square and backed it onto a 12×12 piece of blue Jetstream cardstock. I distressed the edges of the white card to add some texture, ripping it in a few places and tucking some scraps of patterned paper behind.

For this layout I used two 3×4 photos, and I matted them with two different papers from the 6×8 paper pad. I placed them at an angle to each other, in the lower right hand side of the circle of snowflakes. I embellished around the photos with stickers from the 6×8 sticker book, the 12×12 sticker sheet and some chipboard pieces. The title ‘Let it Snow’ is a sticker too. 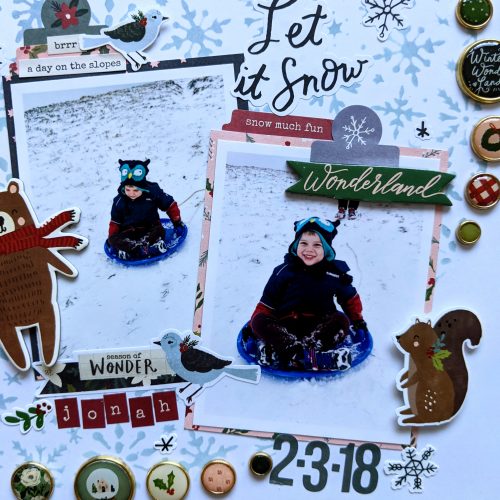 Then using the gold framed brads from the Decorative Brad set, I added three cluster lines along the snowflake circle boundary. I paid attention to both the sizing, working from small to large and back to small, and also the colours so that no two similar coloured brads were next to each other. These brads actually have sticky backs rather than the traditional split pin, which made this job so much easier to do. 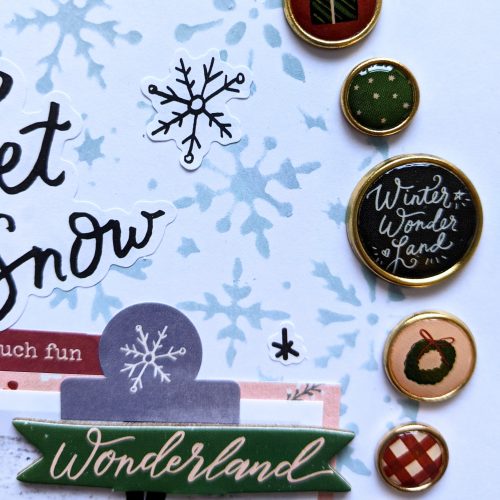 I then added some of the little black lined stars and snowflake stickers to the inked snowflakes, distributing them so they felt balanced. The black just helped the layout have some more contrast and interesting details. 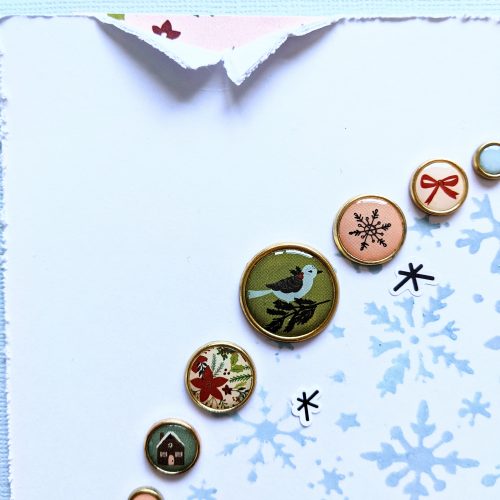 Lastly underneath the photos I added my sons name in red tiny tile stickers, and also added the date. These stickers from from the Simple Stories Color Vibe Alpha Sticker book in Bold. 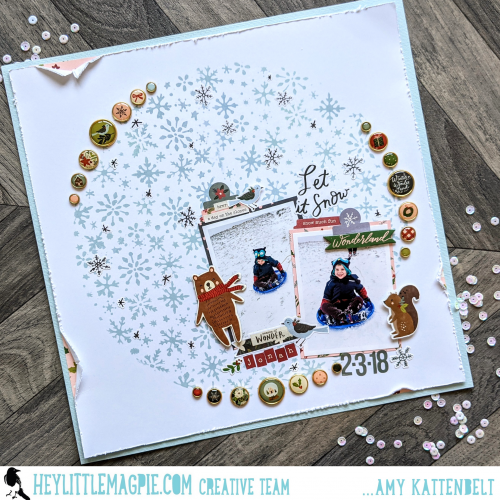 For my second layout, I also used two 3×4 photos. This time I used the red chipboard frame from the collection. A helpful tip is that because the aperture of the frame is actually 3×4, if you print the photos slightly bigger than this it allows you to easily adhere them to the frame. Its good to use a clear wet glue for this, or even some washi tape on the back. 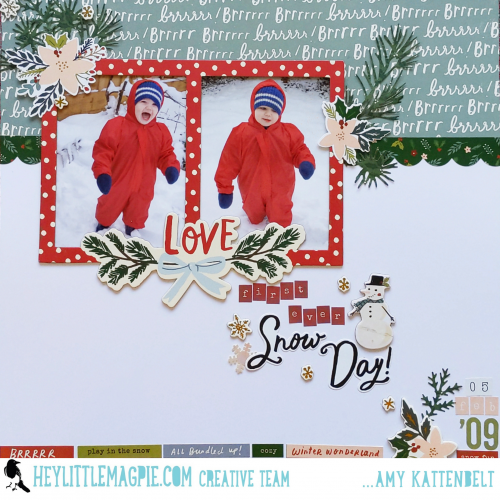 I used a 3 inch full length strip of the pale blue paper called Let It Snow at the top of my layout, and then placed the green scalloped sticker from the sticker sheet below this. I stitched around the whole layout in red thread on my sewing machine. 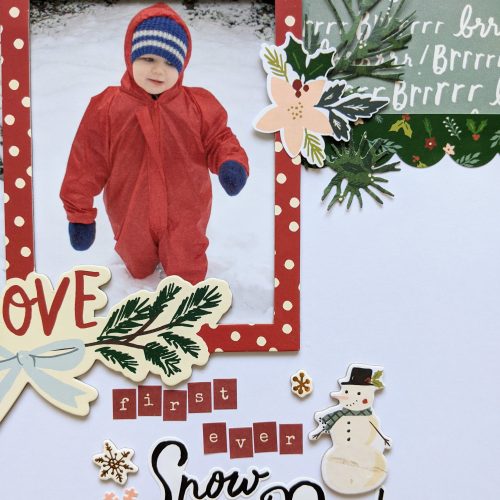 The red chipboard frame already had an embellishment cluster at the bottom, so I tried to replicate this by adding two more embellishment clusters on the frame. I die cut some of the green patterned paper into pine needle branch shapes, and layered these behind floral stickers. I added one cluster to the right side of the frame, and another to the top left hand corner of the frame. 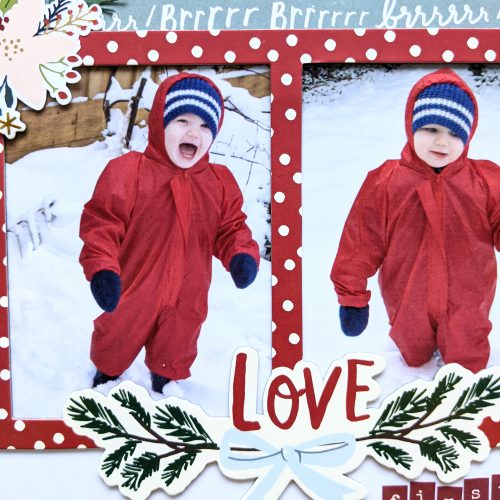 Next I added my title to the white card stock, below the photo, stepping each word down and to the right a bit. The alphabet that I used is the same red tile letter stickers as my first layout (see above) and also a ‘snow day’ sticker from the 12×12 sticker sheet. In the bottom right corner I added the date with similar stickers.

Next I added another flower cluster down by the date, and also added some word stickers in a row to the bottom of the layout. Finally I added some little gold chipboard snowflakes and stars amongst the title as well as a chipboard snowman from the Decorative Brad set. 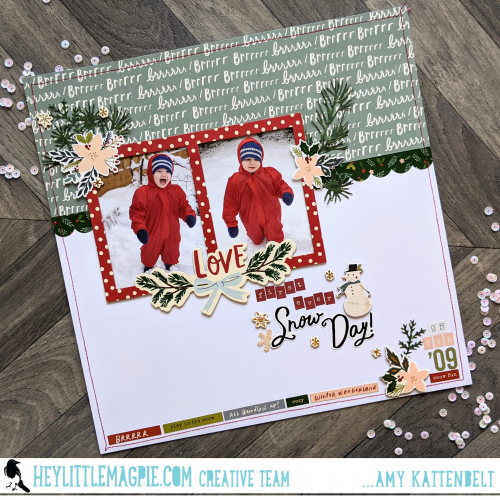 I hope you enjoyed reading about my two wintery layouts, I will be back later in the month to share a few more ideas using this great collection. In the meantime why not head over to the Hey Little Magpie blog and share all your Christmas and winter layouts with us! Stay Safe and Take Care,