Hello.  How are you ?  Back into the swing of things ? I am just about settled into my new routine, transporting my boys to school.
This month I worked with the papers from Studio Calico Heyday and Crafter’s Workshop mask, the reverse chicken wire…how I jumped up and down when I saw that Sarah and Lianne has started stocking more masks.
I have used the mask very lightly on both layouts. This requires a lot of precision so the normal misting is not going to work so I opted for some Distress Stain.
The first layout features a photo of my guys walking towards to entrance of the Harry Potter Studio Tour. I remember my excitement outside, spotting large pictures on the wall, the tour bus, inside the first of the flying car, the sweets in the shop…It was a magical day, for sure! 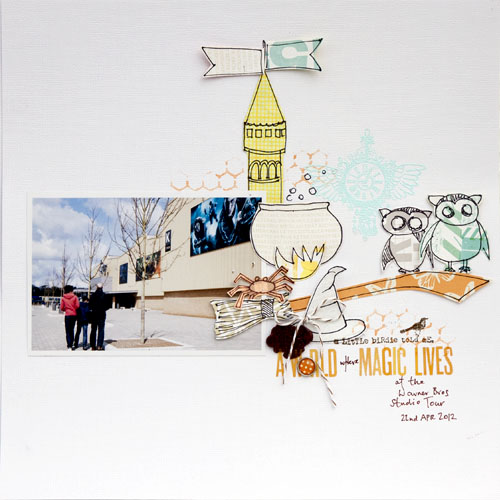 I have included a couple of owls on my layout.  Owls used to be big 4-5 years ago but I wasn’t mad keen on them then.  But a Harry Potter layout has got to feature an owl or two, no ? They are quite easy to draw…a few circles, ears, wings and feet. I drew them out on patterned paper that I then cut out. I added a few other “magical” items…the broom, the hat, the couldron to the mix to make my own unique Harry Potter scene.
The next layout features a photo of my son on his first day of school.  The headmaster described the middle school years as orbiting the moon and going on the dark side.  How true…the grunting has started.  The night scene with the moon is perfectly adorned with some owls, I thought. I added three to a branch on this layout. Even if nothing to do with the moon, the owls are wise and perfect for a school layout, don’t you think ?﻿ 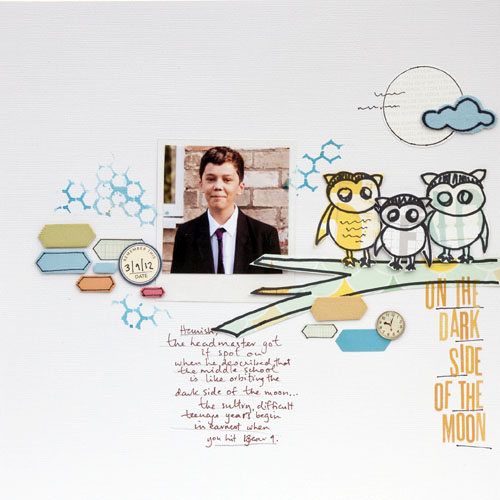 What do you think of my owls ? Will you have a go at drawing a few ? If you don’t like to draw, you might even have an old stamp set.  Have I persuaded you to dig it out ? Might even work for a few Halloween layouts. Tweet Twoo…

Four Seasons In One Day!!!