Hi everyone, Jen G here. I mentioned in my last post that I had stumbled across the Pebbles Basics Banner & Twine kits at the very end of the Retreat in March. I am quite sure that these kits would make gorgeous banners for parties, decorations etc, but I wanted to see how I could use them on layouts. I still had Studio Calico papers on my desk so I continued to use them along with some of the super versatile Pebbles Basics papers.
The pieces in the triangle banner kit are a great size for A4 layouts. I used one here to draw the eye to the main photo block of the layout. The two stars were punched from the centre of a couple of the banner triangles and I put the rest of those triangles to one side to use on further projects… 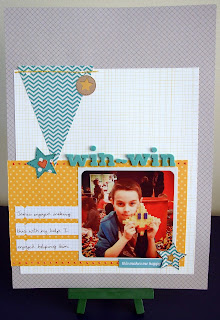 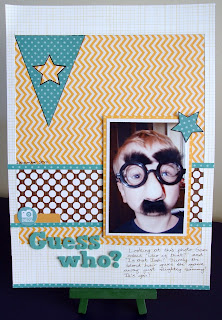 By punching the star from the centre of the triangle the negative of that punch could be used as an element on the page.
As well as triangles the kit comes in a flag banner shape. I chose the powder blue kit. Each kit, by the way, has several different print designs in it. There is large spotty; small spotty; chevron; flowers; check and a ledger paper style. For this layout I positioned two banners behind the photo with Studio Calico chipboard arrows overlapping them to draw attention to that snowball my son was aiming at me! 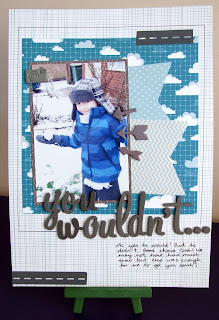 I positioned the banner on this page behind the photo also, but this time I cut it in half first so that I could elongate it to peak at at both sides of the photo. Again I was being pelted with snow at the time the photo was taken! 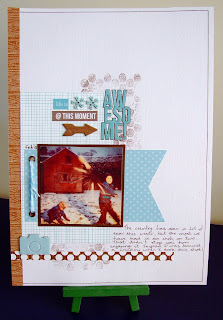 On this next page I stepped away from Studio Calico and went for some Basic Grey Knee Highs and Bow Ties instead. I used one of the banners as a template to cut the same shape from the Basic Grey paper then I layered them up across the page. On the top left of the page I cut a banner in half and layered it back together so that it appeared to be a thinner banner shape as the base layer of the element. 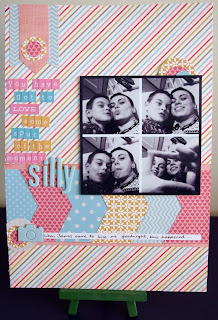 The colours and patterns on these banner kits are really versatile. I still have heaps of them left to use too. Each of these pages also features another versatile favourite of mine – the Simple Stories Sna@p! icon stickers, letter stickers and typeset stickers.

As always, we would love to hear your comments and see links to your work.
Have a great day everyone!