Evening everyone. Just a quick post with a few more pages using My Mind’s Eye Cut & Paste.
Firstly : yes, he really did go out in public wearing these shoes! 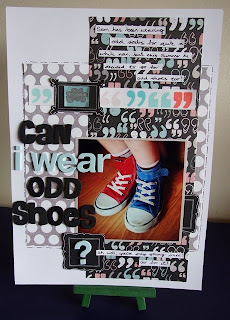 My youngest son has developed a little routine recently when I leave the house. He has to have a kiss, a cuddle, a butterfly kiss and a nose rub! I wanted to record this, but had no photograph of it actually happening. Similarly I had this cute photo, but it was a “just because” photo – it had no particular event associated with it. So I teamed them together with a very fitting title block cut from the Cut & Past “Charm Sweet Treat” paper. I don’t want to forget this little quirk of his when he grows out of it so now it is recorded in his scrapbook. 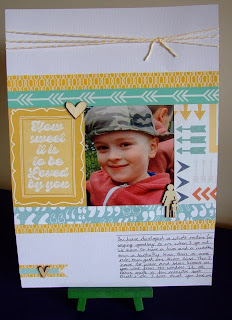 Lastly for today, I scrapped the same “two fingered salute” photo as in my last post again. I have three albums constantly on the go – one for each child. Now and again I can’t decide on which album a page should go in. As this photo was so funny and featured all three of them, I decided to use it on three pages – one for each album. So this is version 2 and version 3 will probably be my next project. 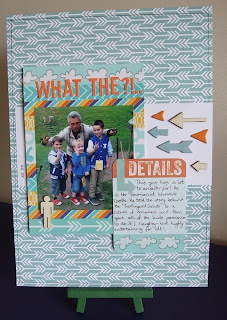 Some of you may think I’m crazy. Others may “get” it. Which camp are you in? Let us know and don’t forget to leave a link to your own work.