If you love Cocoa Vanilla Studio, then you’re sure to love their latest range Midnight…
It’s a seamlessly co-ordinated range of papers with an ombre of colours ranging from palest pinks to the darkest blues… I guess that’s why it’s called Midnight?
It’s certainly a very pretty collection, lending itself to more girly layouts.
I chose a selection of the 12 x 12” papers, along with the Midnight 6 x 8” paper pad, the ephemera, chipboard and flair. 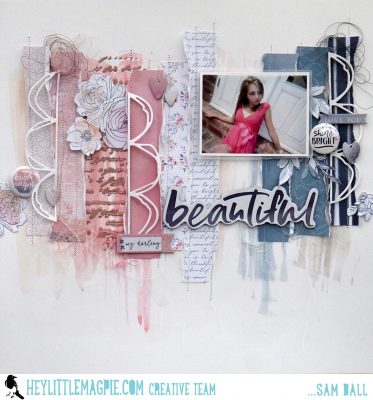 My first layout, titled ‘beautiful’ sums up this collection to me, it really is exquisite.
After tearing up a selection of the 6 x 8” paper into strips, I roughly placed them onto the base cardstock. I then used a selection of the Tim Holtz Oxide Inks – Tattered Rose, Victorian Velvet, Worn Lipstick, Pumice Stone, Hickory Smoke and Stormy Sky, which I watered down then applied with a palette knife to keep them quite ‘boxy’. 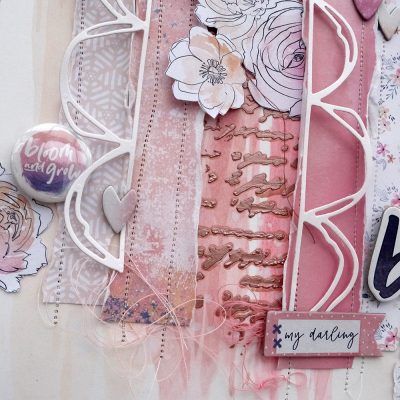 I’ve recently re-found my love of stencils and added a panel of text. I used the Vicki Boutin mask and her Rose Gold Glaze.
Once the background was dry, I attached the papers and added stitching lines for more texture. I used a scalloped border die-cut which was the perfect size to lay over a few of the strips. 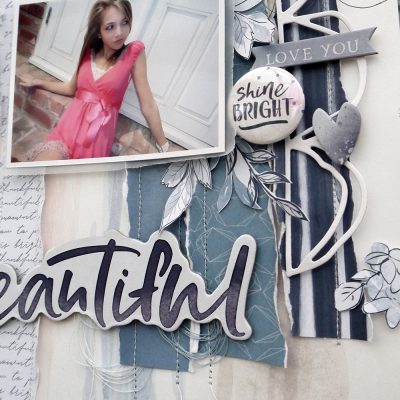 I fussy cut a selection of flowers from the 6 x 8” pad as they were the perfect proportions for the layout.
To complete the layout, I simply added some flair and chipboard pieces, along with my title and the photo itself! 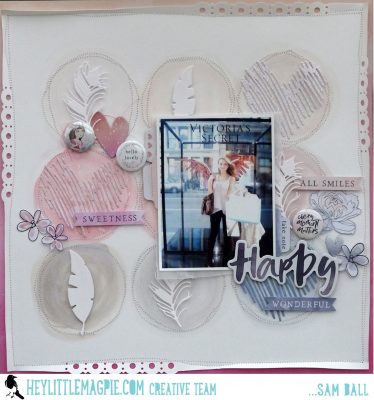 Once I’d broken into the collection, the second layout came together quite quickly.
I had lots of different ideas for this layout… Clustering die-cut feathers to emulate the wings in the image, creating a series of nine die-cut hearts and even using the papers to create a square patchwork effect. 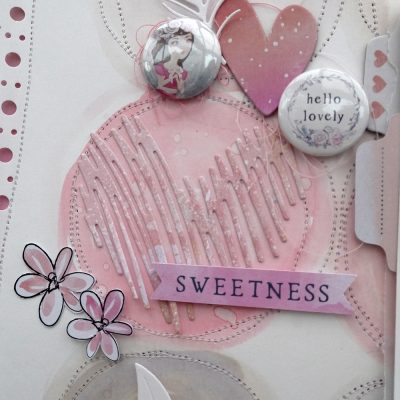 I finally settled on using the same Tim Holtz inks. After painting a series of circles, I then embellishing these with hearts and feathers, ephemera, flair and chipboard.

Once complete, I decided that this layout needed a bit more grounded so mounted in onto the Shine Bright paper.
That’s me for this month, see you in December…