{Love is in the air}

At this time of year many of the big papercrafting manufacturers release Valentine’s Day lines. Now I don’t know about you, but Valentine’s Day isn’t really a major event in our house. At most there’s the exchanging of cards and small gifts, and maybe a nice meal, but it’s certainly not a photo heavy day, nor one that requires multiple scrapbook pages in my albums.Most of the lines have one or two “Happy Valentine’s Day” or “February 14th” motifs, but other than that they are just pretty lines in gorgeous shades of red, pink & aqua – some of my favourite colours to scrap with! All the hearts and love themed icons make them perfect for scrapping weddings, which is exactly what I’ve done. What is nice about Valentine’s paper collections is that they often mix and match really well, because the motifs are similar, and the colours are often similar too. I’ve used:

This page features one of the official photos from my sister’s wedding back in July last year. There was a lot of open space on the left hand side of the photo, so I layered up lots of diet cuts and stickers as a base for my title to sit over the top. The big number 2 is from the Dear Lizzy 5th & Frolic die cut shapes pack. The long pink arrow wasn’t atually long enough to go where I wanted it to, so it’s actually cut into three separate pieces and positioned to look like it goes behind other elements on the page. 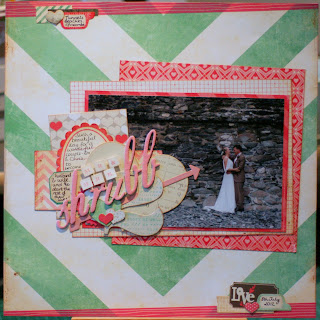 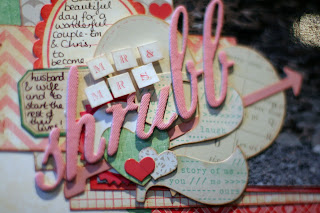 The next page also features photographs from the same wedding day, but they are not of the bride and groom, nor of any other couple. Instead I chose two photos detaileing one of the events from the day which was the fireworks! I picked one of the fireworks themselves, and one of my son curled up watching them. He was nervous at first, but when they finished clapped and clapped, and kept asking for “more bang”. Bearing in mind he was not even 2 years old, and it was 10:30pm I was very impressed that he tolerated them at all! I used twine on the background sheet of paper to follow some of the lines and mimic the feel of fireworks exploding. It also serves the purpose of drawing your eye into the centre of the page. Again I layered up stickers, die cuts and paper pieces, and added a smalltitle and some journalling. 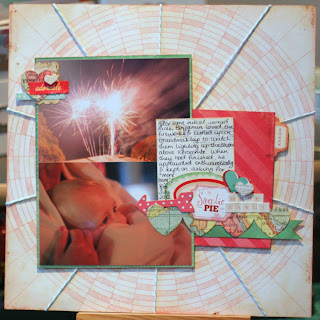 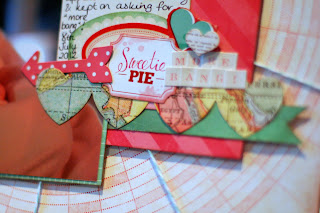 If you don’t already follow the Sarah’s Cards facebook page I would suggest now would be a great time to start – Sarah and Lianne are out in America at the moment attending CHA2013. Lucky girls getting to see all the gorgeous new lines in person, and I’m sure they will choose some fabulous ranges to bring back to us, which will appear in the shop over the coming months. You can find the facebook page here.

Have you shopped the Sale?