I loves pages that feature huge scrolls of deep and meaningful journalling, but I don’t always find that it comes easily for me. At school I was always the science geek rather than the star English student, and so writing isn’t a natural process for me,  I have to work at it. This means that I have had to come up with different ways of including lots of information of my pages, rather than writing lots of long paragraphs for every layout I do. One way of getting around this is using lists. Generally in life I love lists! Whenever I am struggling to get my head around something, I write a list. I have lists for everything, so it seemed a natural progression to use lists in a way on my scrapbook pages.

I’ve made a couple of pages this month to show you how I’ve used lists of things for my journalling. This first page features a list I’ve been keeping ready for a page for some time. Benjamin picked up quite a few nicknames during his first few months of life, and I wanted to record what they were, as I’m sure most of them were temporary and wouldn’t ‘stick’. 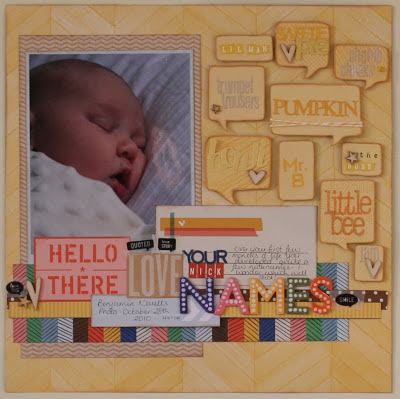 I’ve had the list of names written on my ‘to scrap’ list for a while now, so I used that as the main feature on my page. I paired it with an early photograph of him, but the photo isn’t directly relevant, so it could easily have been a photo-less page too. I cut speech bubbles from the patterned paper and added them to the page on foam squares, then adding one nickname to each. I’m suire Benjamin will appreciate the fact that I’ve recorded ‘trumpet trousers’ as one of his names when he’s older! 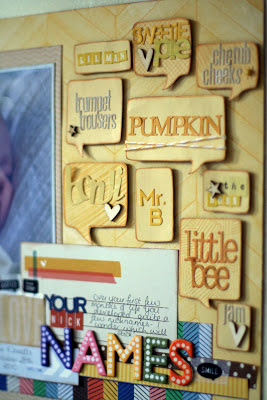 The second page I’ve created is a rare thing for me – a double page spread! The photos are from my sister’s wedding, which has it’s own album dedicated to it. The title page is just one large photo, but I wanted the next spread to be a synopsis of the day. I wrote out a list of what happened over the day, and at what time, and created a sort of timeline of photos. I couldn’t include everything, but that’s why it has it’s own album! I picked 8 main events from the day, and arranged photos in a strip over two pages. 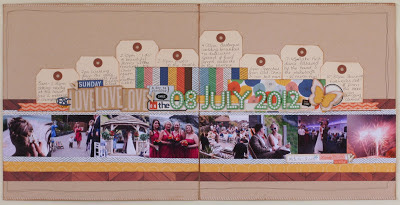 I added 8 tags to the page for the journalling, which is essentially a list of what happened when. I chose getting ready, walking down the aisle, the ‘I do’ moment, photos on the beach, the meal, the speeches, the first dance and fireworks. This page has a lot of information on it, gbut it comes from a simple list of the order and times of events on the day. This kind of timeline would also work great for a holiday – one photo from each day with bullet points about what you did, and you have the perfect start to an album! 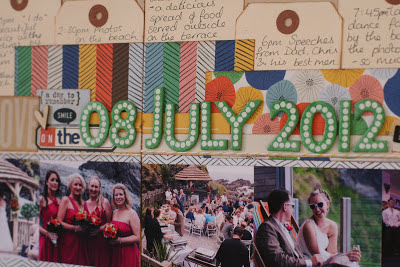 Why not give it a try – lists are a great way of including a lot of information without writing huge lengths of detailed journalling. As always the products I’ve used for these pages can be found below.