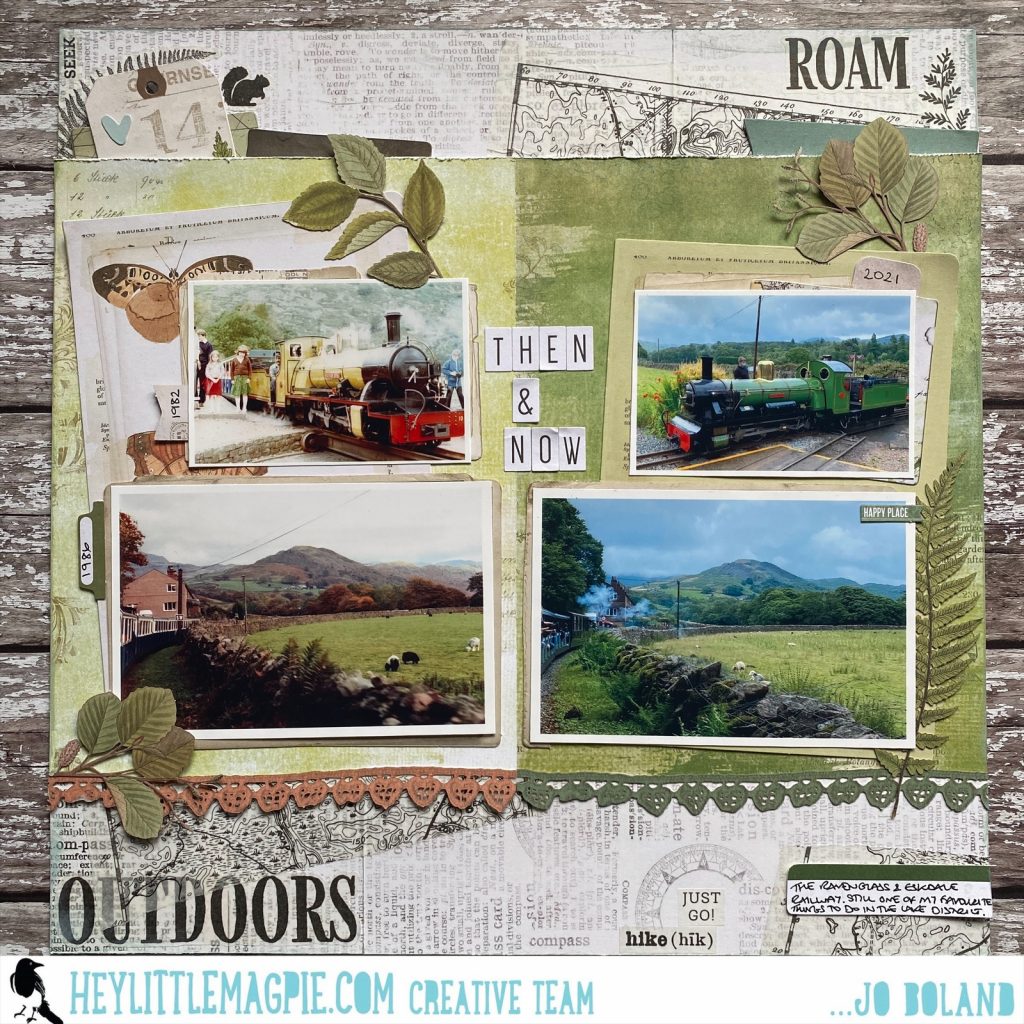 Hey there, it’s Jo here with another look at the 49 & Market – Vintage Ancestry Hike More collection. Last time I shared a mini album and this time I have two scrapbook layouts to show you. 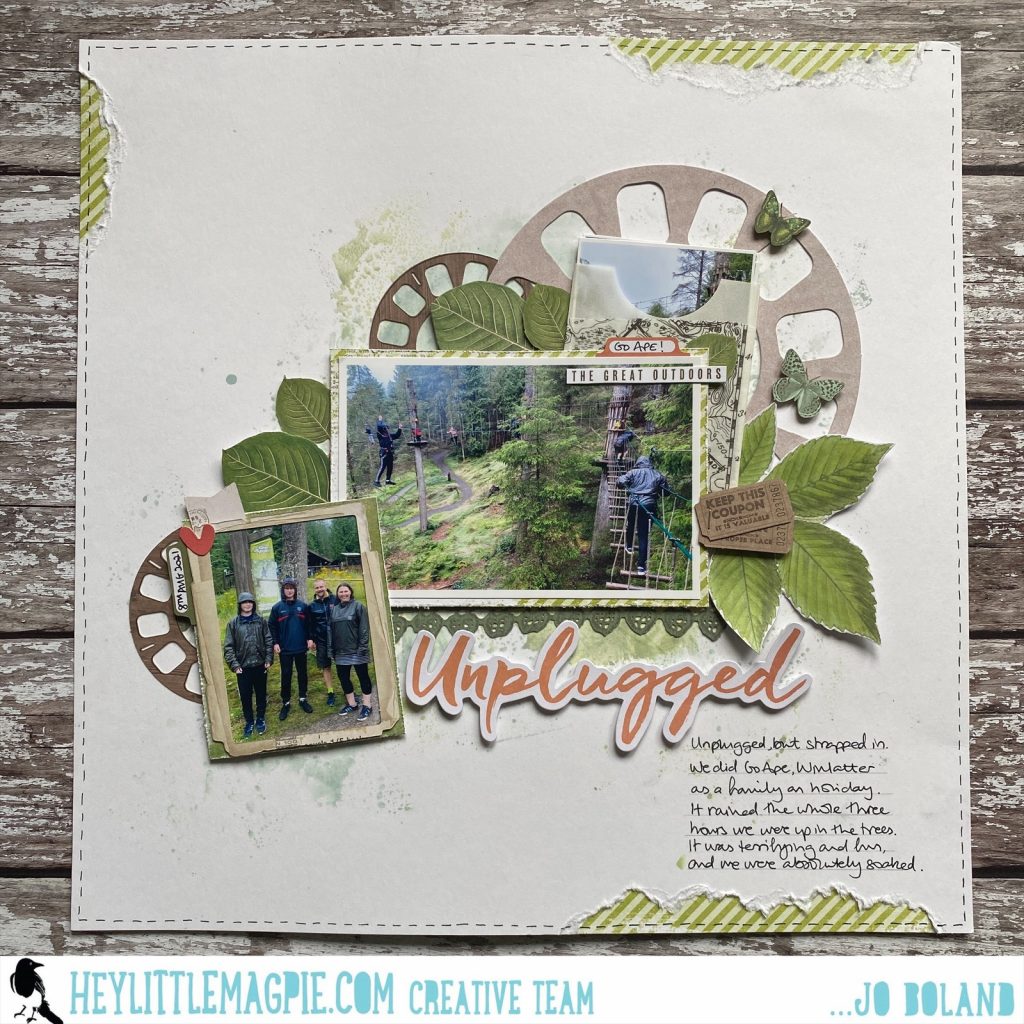 For this layout I used a sheet of Bazzill Marshmallow cardstock and used the ‘packaging technique’ with two Distress Oxides and water. I used the Speckled Egg and Bundled Sage Distress Oxide, both of which go great with the Hike More collection. Once it was dry, which didn’t take long, I layered up die-cuts from the Die-cut Pieces pack and the laser cut sheets from the 6×8 Collection Pack. 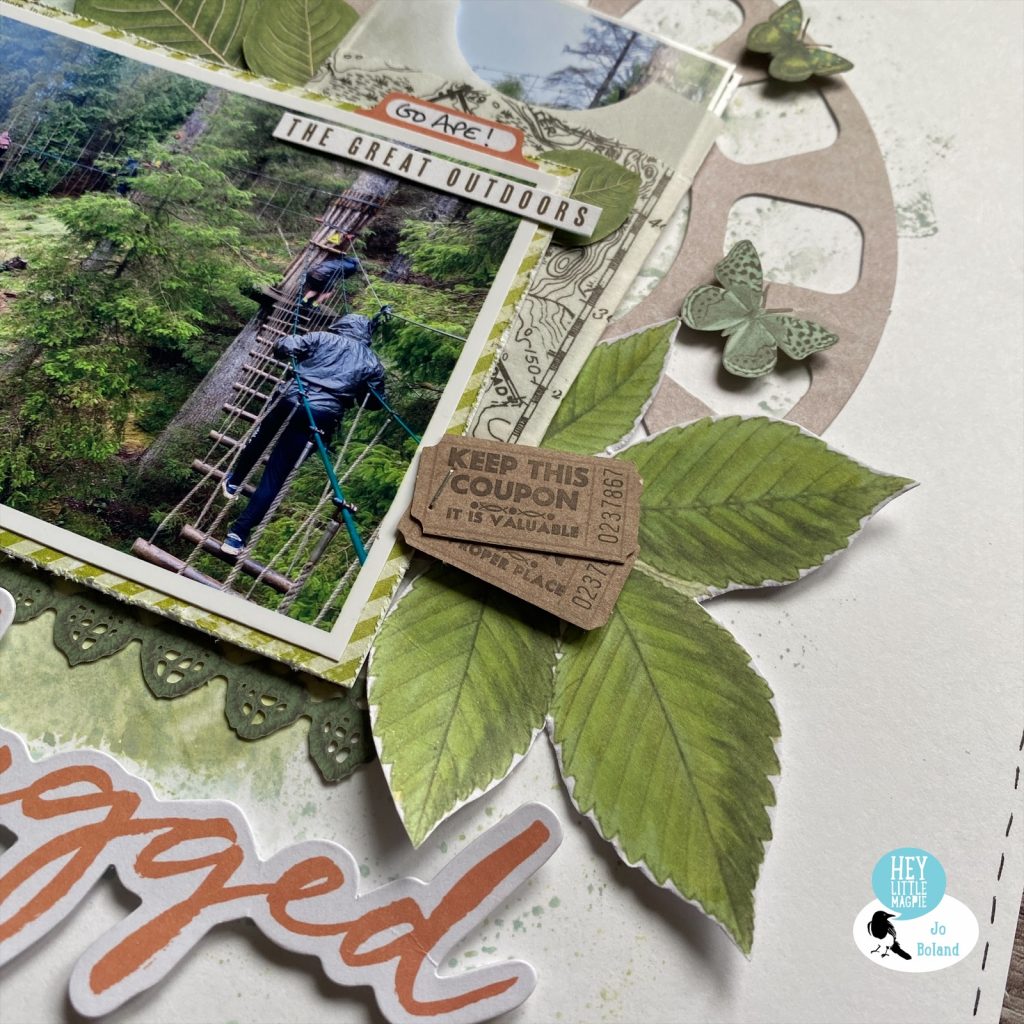 The photos are matted on papers from this pack and I created a little photo pocket from a piece of vellum covered in the map washi paper. 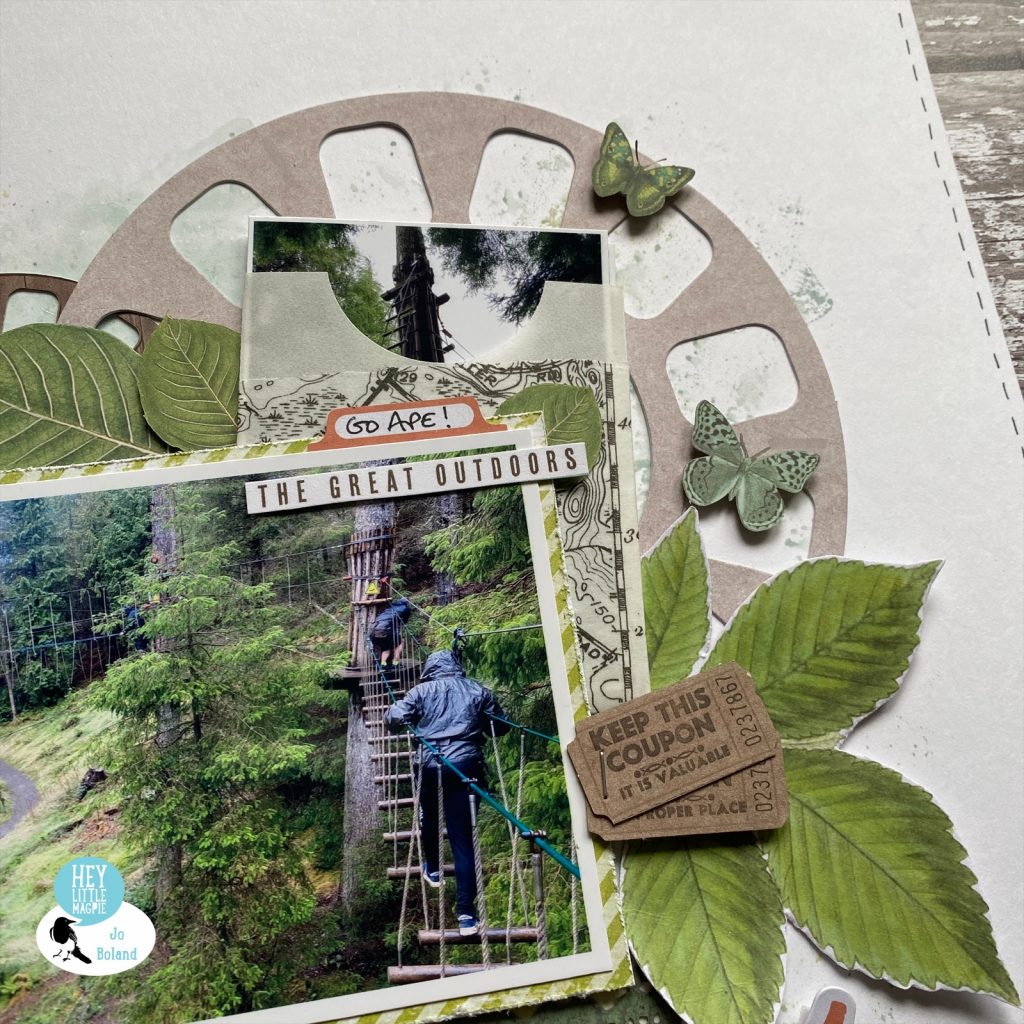 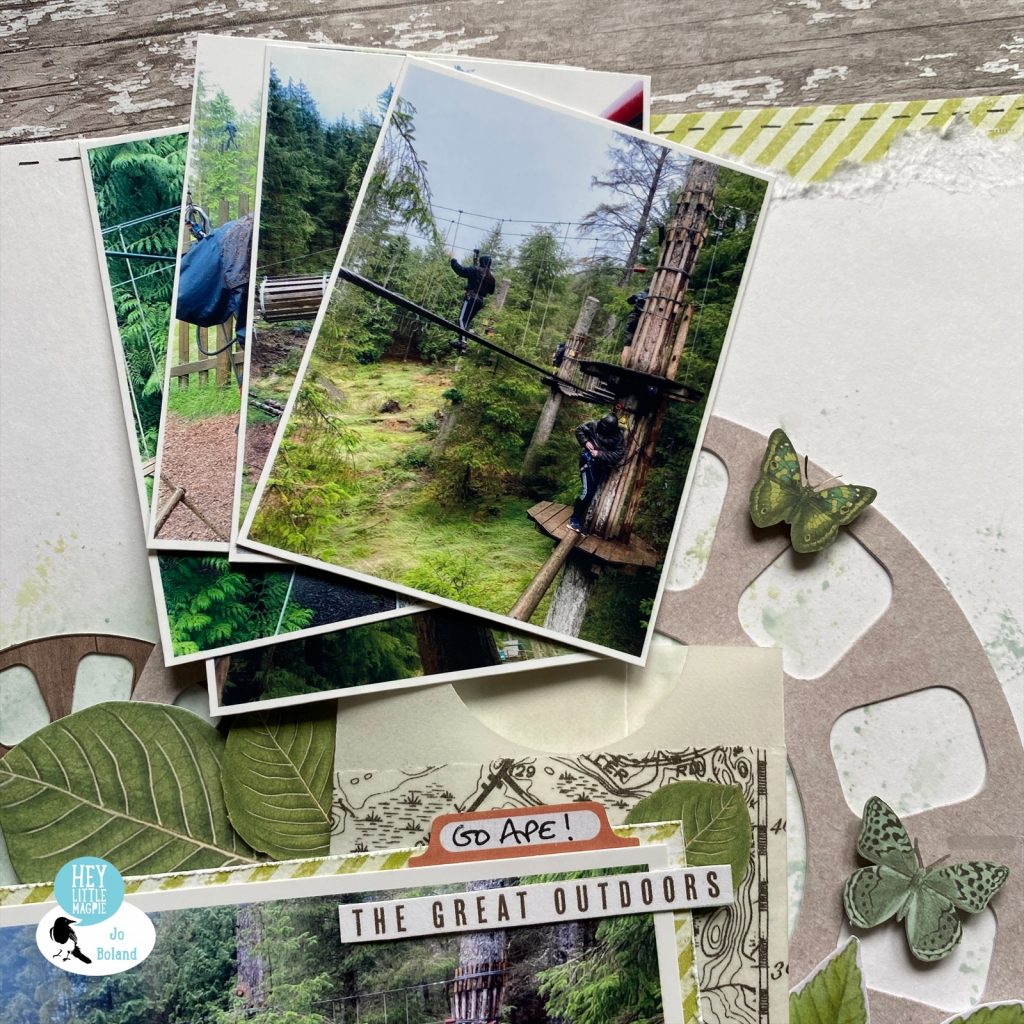 The title is from the die-cut pack and is raised on foam pads to give it dimension. I’ve done this with some of the die-cut leaves, the matted photos and the ticket cluster. I added strips of paper along three sides of the background and tore away the cardstock to reveal it behind. Then added faux black stitching with a pen to create a border and pull it all together.

I wrote my journaling under the title and added a little heart sticker from the Jen Hadfield Reaching Out collection sticker book. It needed a third orange/red colour to create a visual triangle on to the page. 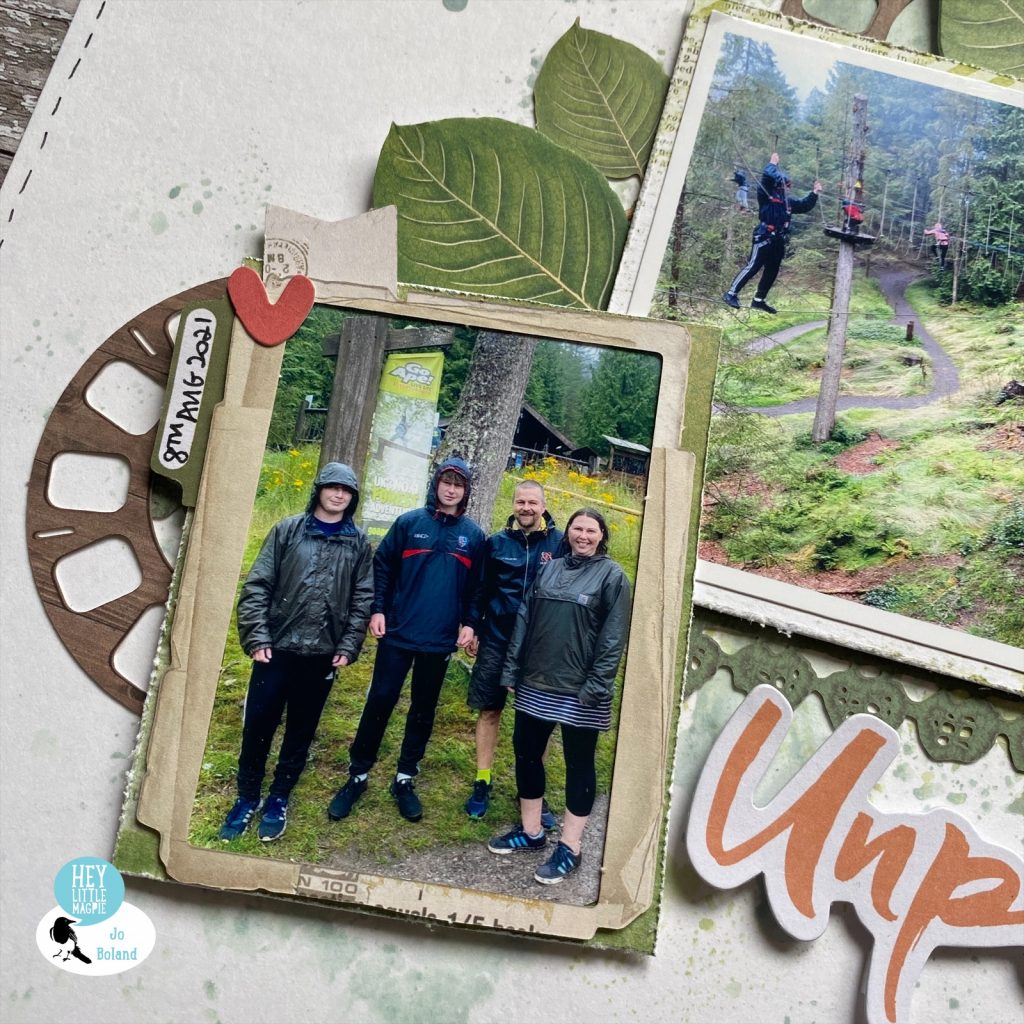 Something that I like to do each time we go to the Lake District is to go on the Ravenglass & Eskdale Railway. When I was a child, we’d spend a week on holiday there and go on the railway at least once.  This summer we went on it again. It just so happened that I’d taken the same photo my dad had taken 35 years earlier. The end cottage was where my dad’s old school friend lived as he worked on the railway. We spent a lot of time there as he had two daughters the same ages as my sister and I. I paired the photo from 1986 with one of my sister and I in 1982 with one from this year. It’s taken at a different angle and it’s a different engine, but it’s the same turntable at Dalegarth station. 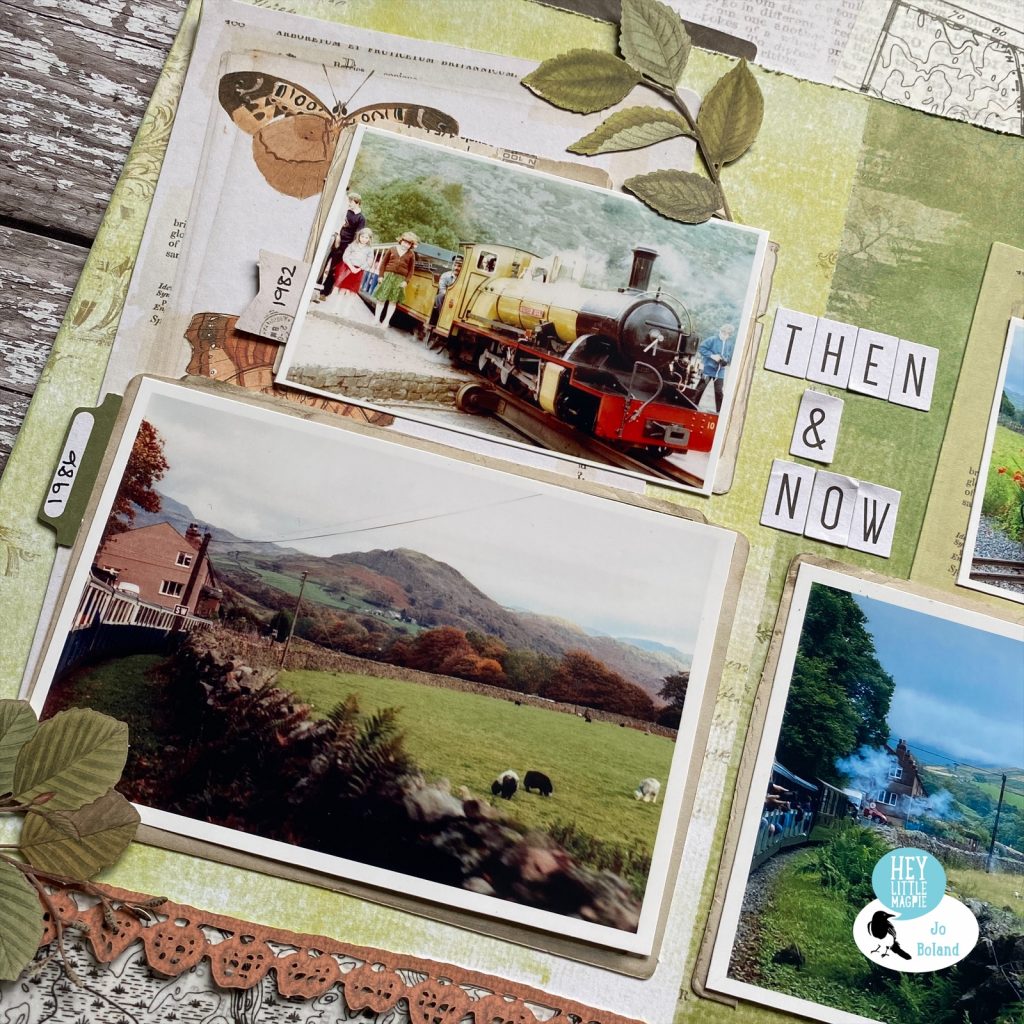 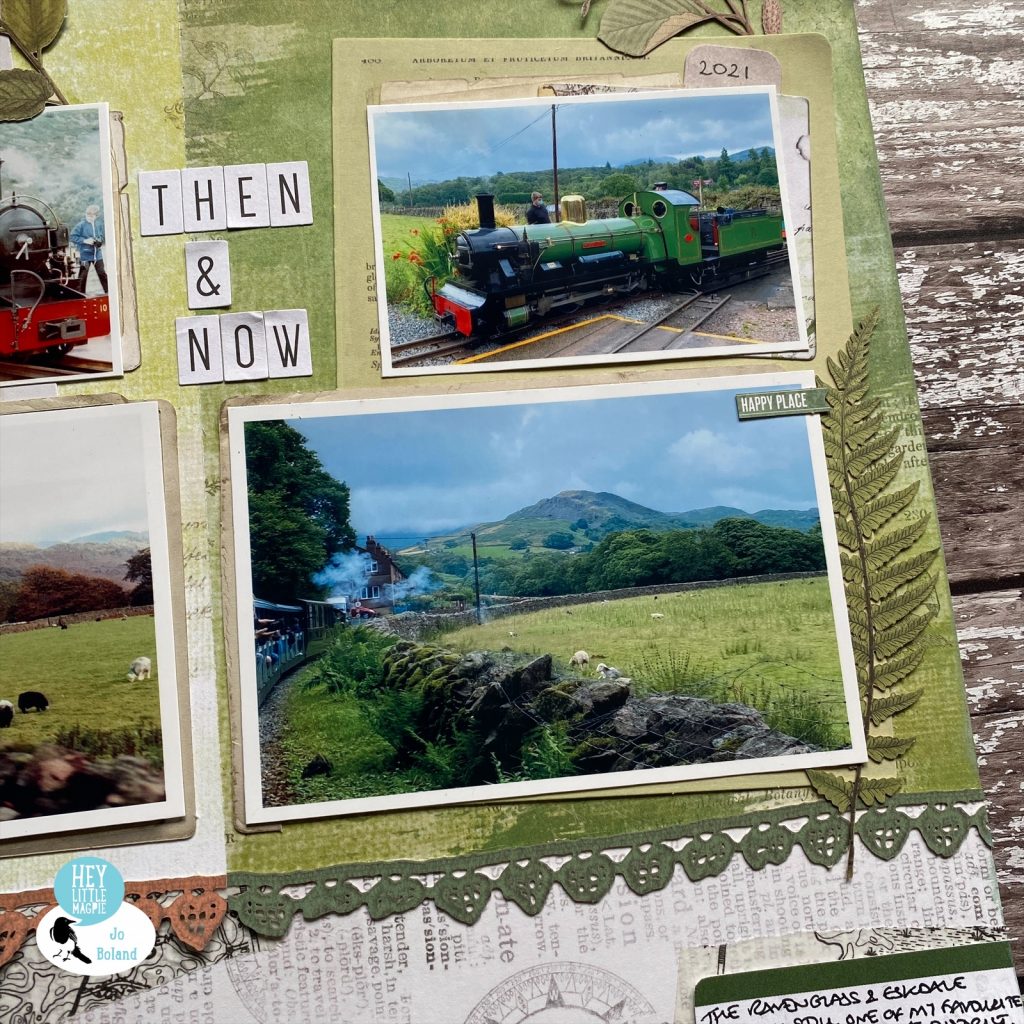 The layout is made using the Journal Cards 12 x 12 paper from the Hike More collection and I’ve layered washi tape pieces over the top of it. I’ve used two 6 x 8 papers to represent the ‘then’ (faded green) and ‘now’ (richer green). Along the bottom edge I’ve added laser-cut trim pieces, joining the two different colours together in the middle. I tucked die-cut cards and photo frames under the photos and added dates on tabs. I’ve also adorned the page with die-cut leaves, some of which I’ve raised on foam pads. 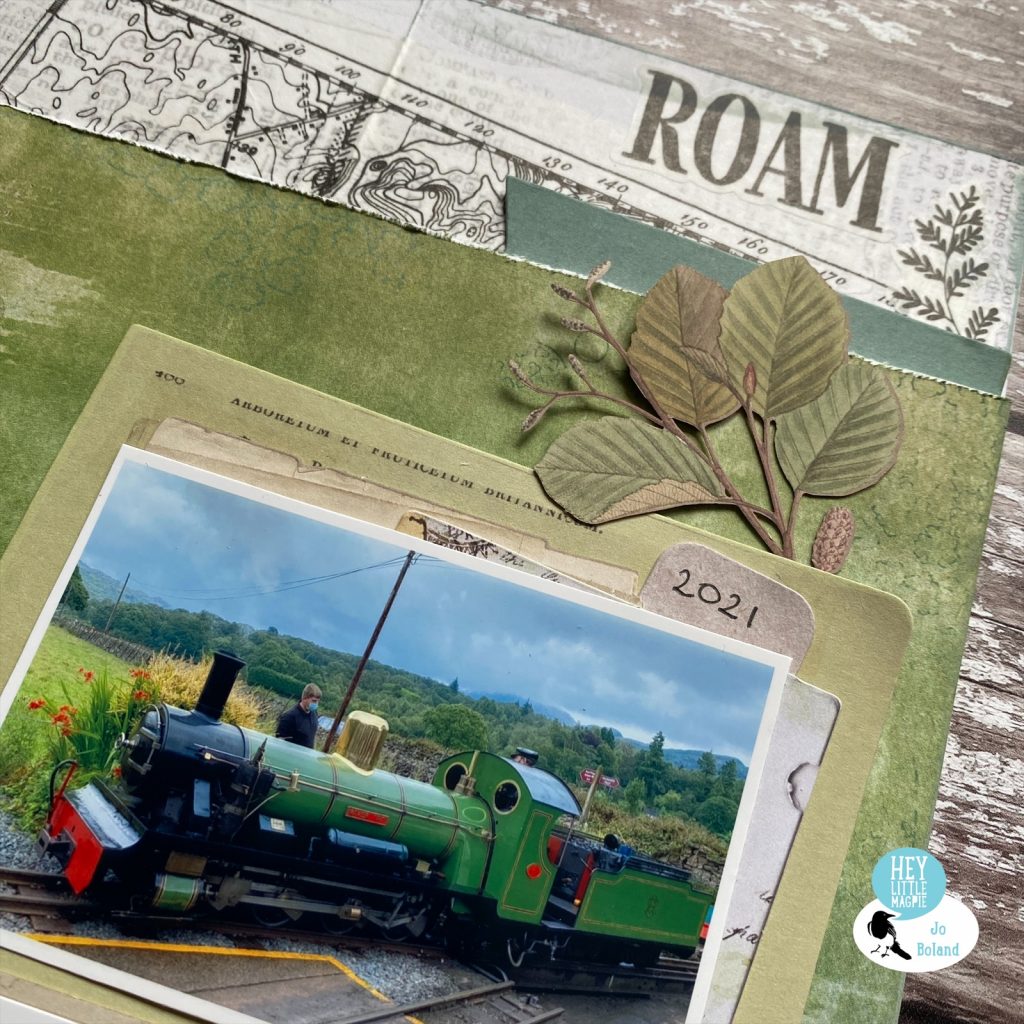 I’ve tucked tags and photo frames along the top edge, plus a heart sticker from the Jen Hadfield sticker book. 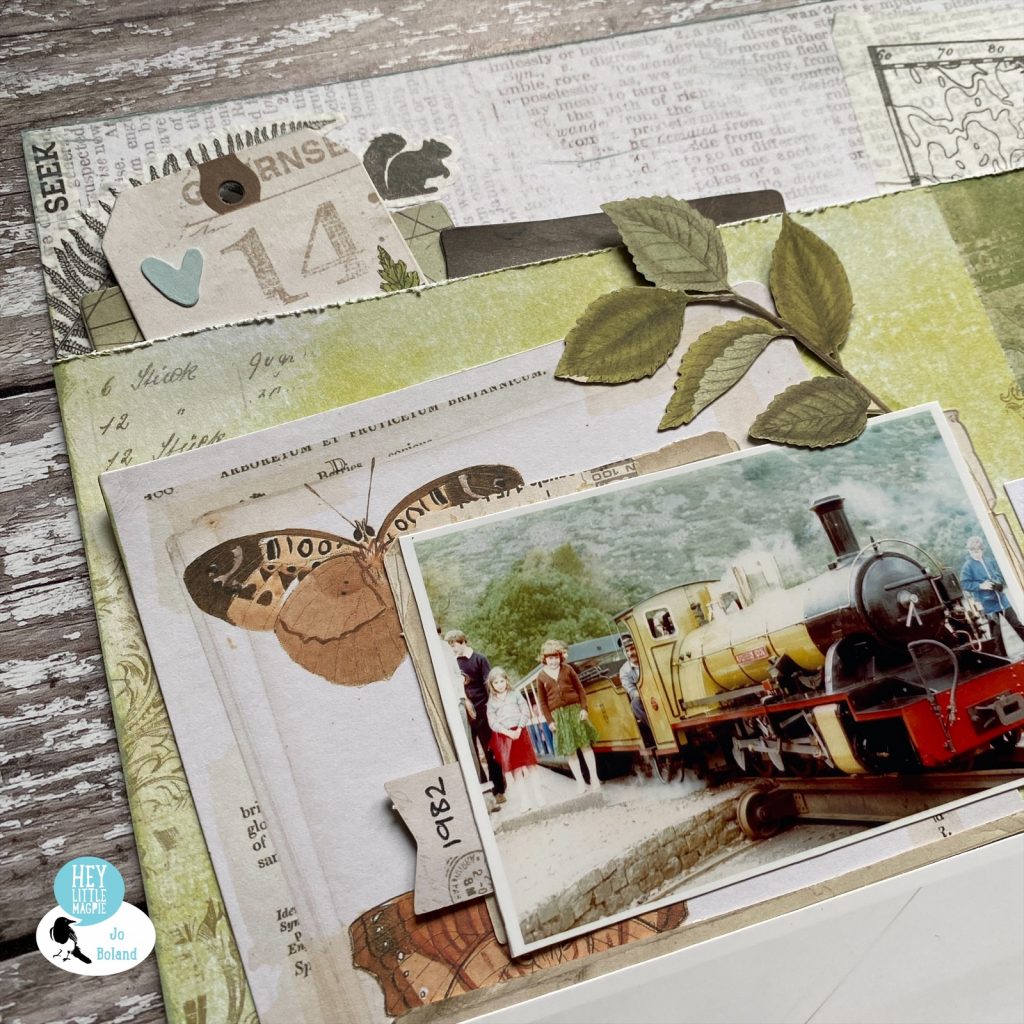 My title is made from Elle’s Studio letter stickers and I’ve added a little bit of journaling to a cut out label placed at the bottom of the page. Finally I inked around the edges of the layout with the two distress oxides I’d used in the first layout. 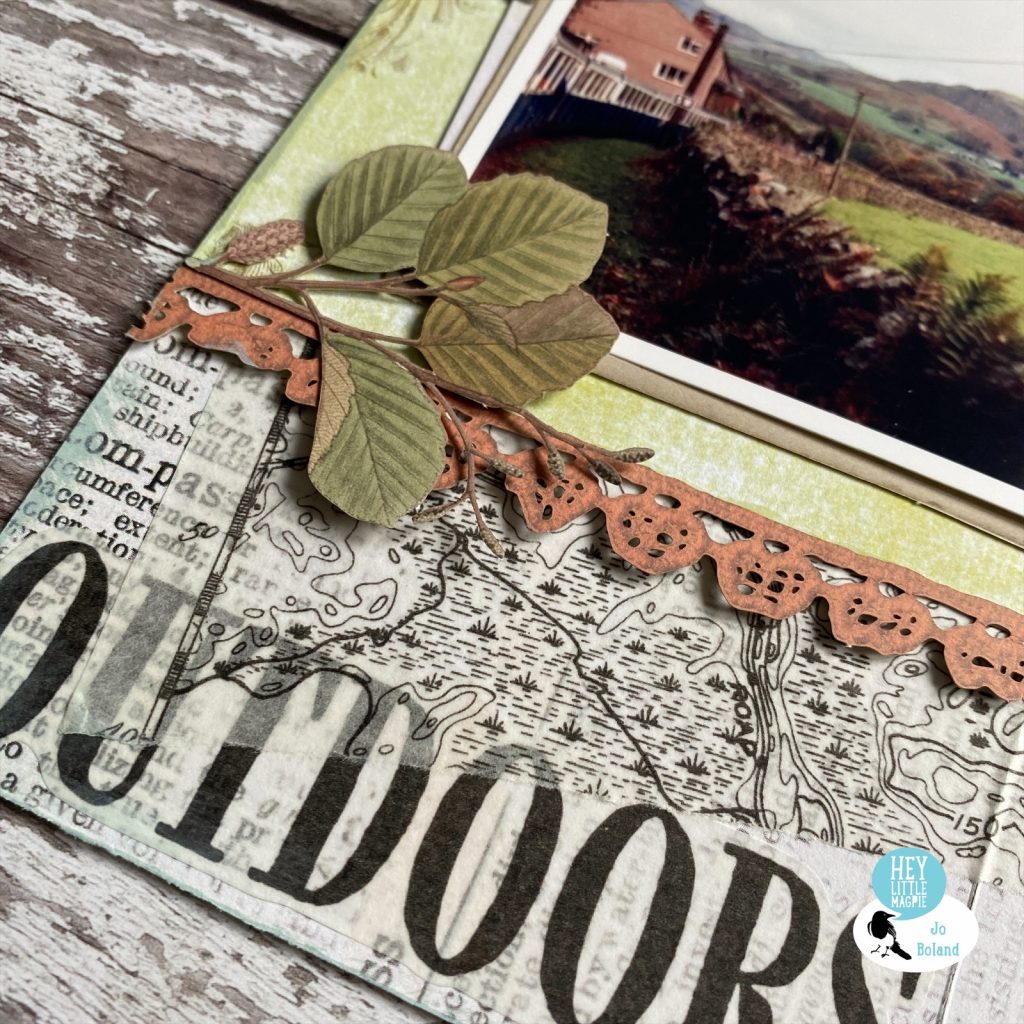 Don’t forget, the monthly challenge is still live on the Facebook group and it’s to use the ‘Then & Now’ prompt as a title. You’ve got until midnight on the 31st August to add your entries to the album. You could win 1000 Magpie Points (worth £10 to spend in the Hey Little Magpie store).

Thanks for stopping by, check out the full 49 & Market Vintage Artistry Hike More collection in the store here.