I’m not normally one for themed pages or ranges of products but after taking the kids to a Halloween party during the holidays, I had a whole load of pictures that needed scrapping.  The American Crafts ‘Nightfall’ was ideal for them.  I also noticed that the patterns on some of the sheets or the reverse sides weren’t themed at all but perfect for using on layouts of my boys.
So picking out some products from the range, I set about challenging myself to see how many different layouts and looks I could make using just four papers and some tape, stickers and thickers as my main supplies.

and some Nightfall Mixtape.
‘The Garratt’s Halloween Party’
My first layout was about the Halloween party that we went to. The spider’s web was inspired by a pattern on one of the papers, but because it wouldn’t cut out easily, I decided to draw it using a versamark pen and embossed with some black Zing! powder.  I used a mixture of the papers and also the strips from the bottom of the sheets on this page as well as cutting out some of the ghosts and a pumpkins to embellish the page. 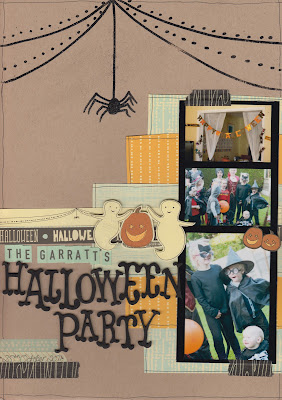 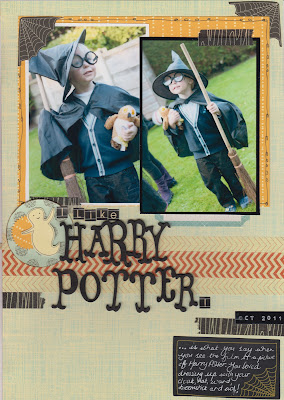 ‘Like father, like sons’
This was the third layout that I created using the Halloween collection but this time in a non-Halloween way.  This layout was all about how my two boys love computers.  Well, actually, they love damaging computers, but maybe one day, they’ll be mending them too, just like their Daddy!  I used more of the papers, chalkboard sticker and tape, along with some Jenni Bowlin Mini Chalkboard Stickers and Jenni Bowlin Tiny Circle Alpha Stickers. 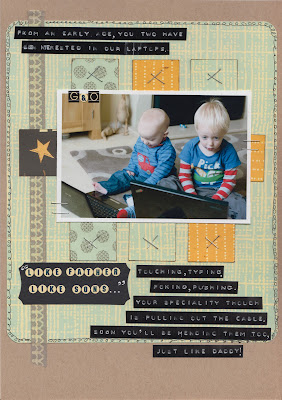 ‘George’s Nose Face’
My fourth and final layout (so far) tells the story of George’s ‘Nose Face’.  I’d typed and printed out some journaling in numbered points about how he makes this face and, trying to use up some more of the papers, I decided to cut out random strips to use as a mat for the photo and also to stick each point onto too.  I cut up one of the chalkboard stickers to use as embellishments on the page, before finishing it all off with a machine stitched frame and some zigzag stitching on some of the strips. 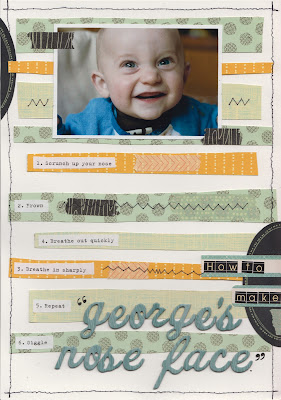 I’ve still got some scraps of these papers left, so I may still create more pages from them.&nbs
p; I’ve certainly had good value out of them so far!  Remember, if you want to see the layouts in more detail, then click on the photos to zoom in.