Hello, it’s Louise here after a month a short break away. This month I decided to theme my post around football. Having 3 boys (4 if you include the big one), it was only ever a matter of time before football became an obsession in our house. Rob and Oliver went to see their first football match together when Manchester City played Wolverhampton Wanderers at home at the Etihad Stadium. Up to this point Ol had always been unsure of whether to be a blue like his dad, or follow his friends and be a red. He enjoyed the atmosphere at the match so much, and the fact that City won, that he pledged his allegiance to City.
I misted the chevron mistable paper with Hydrangea Maya Road mist, before laying a black grid Hambly overlay completely over the top. The hexagonal mistable paper was cut to size and the desired shape, but left plain. I hand cut a cluster of 3 hexagons, and a single one, painting them with blue acrylic paint. Once the paint had dried a quick rub over with a piece of kitchen towel, cleaned away any paint from the resistable areas. These painted elements were added to the LO using foam tape to add a little height. 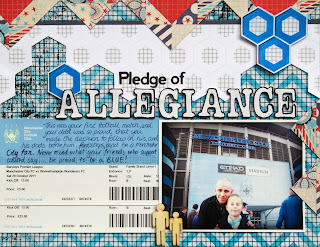 I added my title using the DIY thickers, choosing to leave the paper layer on, and using a black pen to add an outline around each letter. 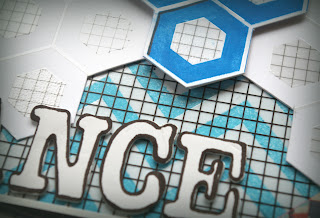 My second LO was created for Oliver to celebrate Manchester City winning the Premier League Title. We were travelling home from a weekend away listening to the match. Like everyone else we thought City had blown it and the title would go to United again. When the final 2 goals went in in the final few minutes the shouts and whoops in the car were deafening! We are surrounded by City fans where we live and the atmosphere when we got home was electric. 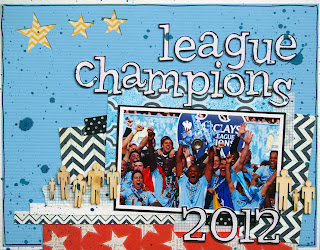 I kept the LO simple, cutting out 3 stars from the backing card and placing a scrap of yellow chevron paper behind. This detail picks out the stars above the city badge. 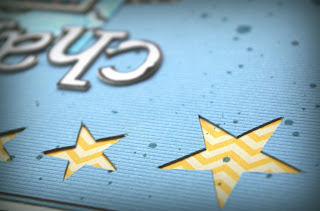 I used a piece of mistable paper behind the photo, layered with scraps of chevron and star patterned papers. 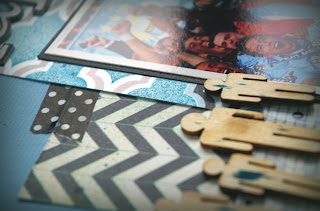 As with the previous LO, I used DIY thickers for the title, outlining in black so that the letters stand out. The cute wooden people were added along side the photo to imitate the rest of the team celebrating the cup being lifted.
A proud moment for Rob and Oliver, and for every City fan who wondered if the time would ever come again.

Where there is light, there must always be dark. Which brings me to my final LO. A LO to celebrate when Manchester United won their 19th title (insert spitting sound effect). A friend of ours appeared in the papers celebrating in the crowd behind Sir Alex Ferguson, so this LO was a keepsake for him, to remember the moment. 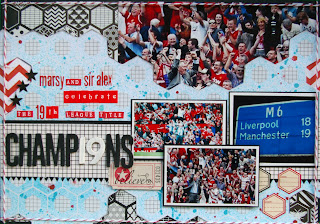 After placing the white Hambly overlay on black card, and adding the main photo, I cut the hexagonal paper to the desired size and shape. 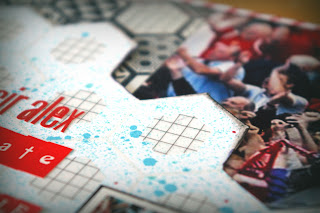 After giving it a very light misting of blue and splattering some red ink, I stuck it into place, placing pieces of red chevron paper behind a couple of the cut out areas. The title was created using a mix up of small red alphas from my stash. 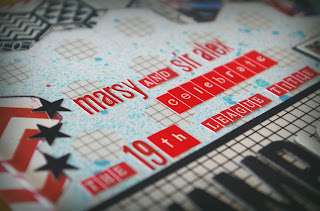 A ‘believe’ rub on that had been in my stash for years, was the perfect size to be added to a Jenny Bowlin ticket, which was then tucked behind one of the smaller photos. 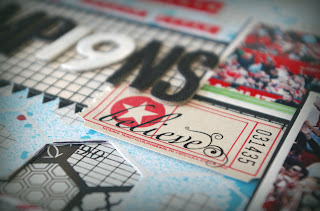 The mistable papers are a lot of fun to use, and it’s only once they’ve had colour added that you can see just how stunning the designs are. If you haven’t had a play with them already, I recommend you give them a go, you never know, you may just fall in love with them as I have done.

Well that’s all from me for now. Remember to pop back every few days to see what the rest of the team create. We also love to see how you use products brought from the shop, or how we have inspired you to try something new. If you leave a link to your work we will come and have a look. And don’t forget to play along with our monthly challenge for your chance to win a £20 e-voucher to spend in the shop. And with all the new goodies arriving from CHA, you’d be mad not to have a go.

Hurrah for the London Games!

So many photos, so little time…