Good Morning Magpies, I am here sharing this whimsical layout that I created with the gorgeous new collection from Crate Paper called Magical Forest. I knew that I wanted to create a fun, playful scene as the basis of my first layout made with this collection.

For my background I used the B side of the patterned paper called Critters. I cut some cloud shapes out of white textured cardstock, and stitched around the edges in white embroidery thread. Next I cut the rainbow out of the patterned paper called Childhood, and used the middle three colours to form my own rainbow in my sky. I then cut some heavystock smooth white cardstock into two hill shapes. I coloured these with two shades of green distress oxide and a foam applicator tool. You could also cut these out of a green cardstock is mixed media isn’t your thing. 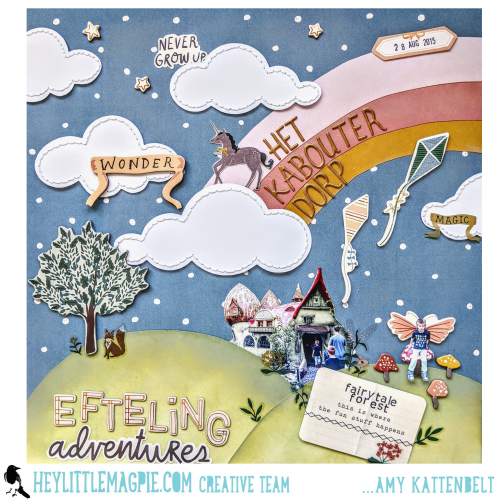 I fussy cut this small photo of my son sat on a toadstool at the Efteling fairy tale forest, and for a little bit of fun, I stuck it onto a butterfly chipboard sticker from the 12×12 chipboard stickers. This made him look like he had wings and antenna. I also placed three of the chipboard toadstools around him. Efteling is an amazing theme park in the Netherlands, and within it there is a beautiful fairytale forest areas and I thought these photos were perfect for this collection. 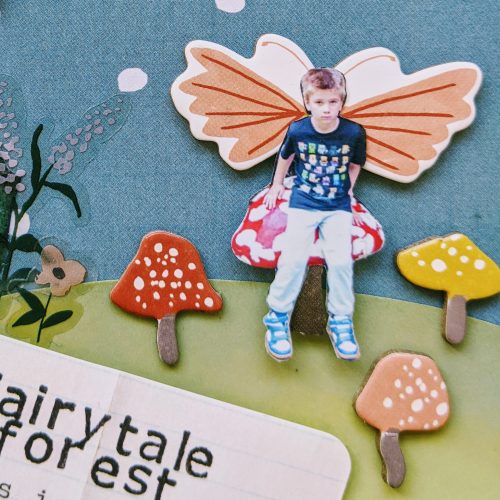 I fussy cut a little unicorn out of the patterned paper called Imaginary , and stuck it so it looked like it was standing on top of the largest cloud. I also stuck chipboard kites and stars into the sky, as well as some banner  and phrase stickers. 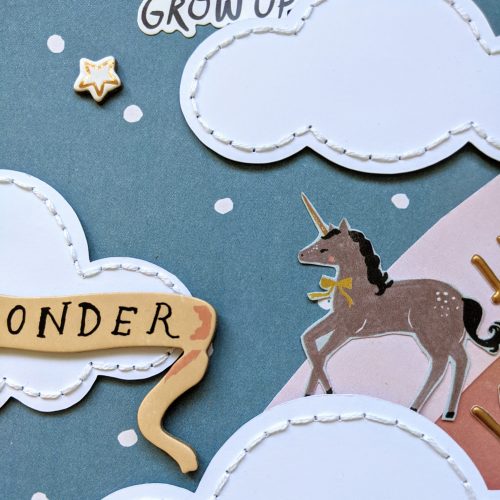 I added a little fox sticker from the sticker book, which sat under the large chipboard tree element. Then I used several of the flower stickers from the book placed around my layout scene for added detail. The title ‘Efteling Adventures’ was creating using the Thicker set for the first word, and the ‘adventures’ sticker from the 6×12 sticker sheet. 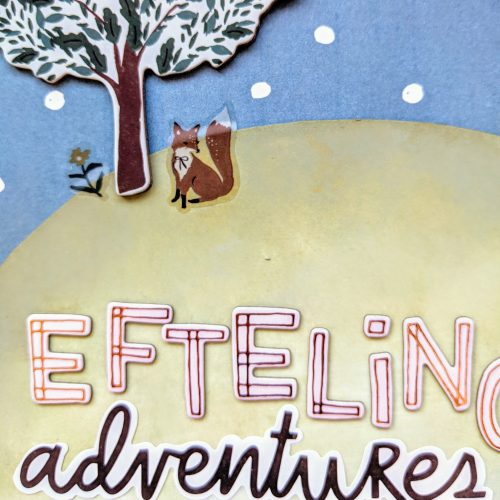 My main photo, was also fussy cut and placed in between the two hills. I added a few flower stickers overlapped to try to blend it into the scene well. In the foreground of the scene I added an ephemera piece  that is shaped to look like an open book, and i stamped the words ‘fairytale forest’ in black in above the pre-printed text. 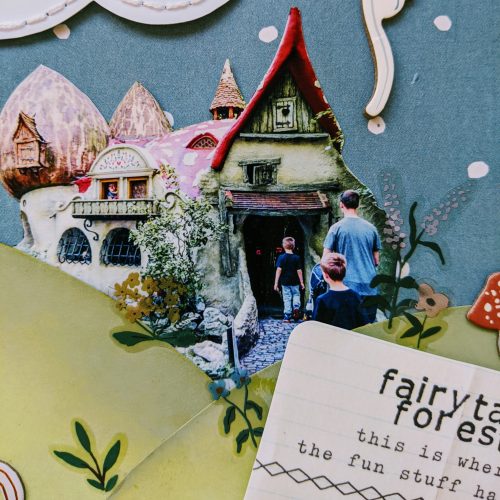 For extra information, I added a subtitle on top of my rainbow with the copper puffy alphabet stickers. The subtitle reads ‘Het Kabouter Dorp’ which translates from Dutch to mean ‘The Gnome Village’.