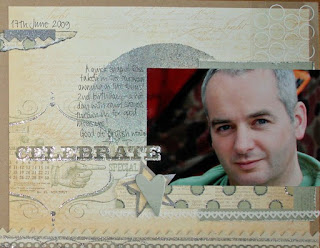 Here is another layout I have created using the Portobello Road collection from MME Lost & Found range. I used Kraft as my base & trimmed the paper with the banner on it, saving the banner for another day, the edge of the shaped paper made a great zig zag border strip along the bottom of the layout. Using a craft knife I cut around the “E” of “Celebrate” and slipped the photo under it. I matted the photo onto a few more papers, adding a small scrap which I inked with charcoal chalk ink to the left hand side along with a small chipboard zig zag strip which had been covered in pewter micra mist. The star in the bottom left hand corner was cut from the card I had sprayed the chipboard star from the previous layout on – it left a white star with a huge amount of spray around, which I trimmed down to a border around the white star. The white was too stark for this layout so I used a teabag to stain it bringing it down to cream. the heart on top is a chipboard heart covered in a scrap of paper.I wanted to add a circle to the left of my picture to write my journalling on (an idea blatantly stolen from Lianne that day!!!) but didn’t want to use paper. Instead, I used acetate to create a mask over everything except the circle I wanted to create. I then used the pewter and teal micra mists to block colour the semi circle. The journalling was added using a black slick writer.