Recently a friend asked if she could look through my scrapbooks, as she doesn’t scrap I was thrilled that she was interested and she became quite engrossed. Several cups of coffee later and she’d worked her way through over ten years worth!

Was I expecting some acknowledgement that my style had developed over the years? A little gushing over the way I’d painstakingly spent an afternoon cutting something out, sewing or making something? If I did I was going to be disappointed! Even a ‘ah those are nice’ would have been gratefully received! What I wasn’t expecting was – ‘those are better’ as she pointed to my earliest (and in my mind, plain, flat and boring) early efforts, I resisted the urge to hit her over the head with my cropadile and instead simply asked why she thought so.

Her answer was ‘They told a story’. In that moment I realised that a non-scrapper barely even notices all the little fripperies that make a layout or scrapbook aesthetically pleasing. I suppose it’s like looking through a magazine, we expect the pages to be glossy, well photographed and laid out, but what we want is to be entertained. Now many of you will probably have worked this out years ago, but I’ve never been the quickest to catch on! I felt I had learned as much in one afternoon with a non-scrapping friend as I have in the years of sharing my passion with like-minded people.

I realised that I had lost sight of what made me start scrapping in the first place, and that was to tell a story, mine and my family’s story.
When I first started there were so few scrapbooking supplies available that I worried far less about embellishments and spent my time ‘telling the tale’. Years later and slowly being buried amongst a rapidly expanding pile of tantalising goodies I’d stopped telling a story and started focusing instead on the design.

So, am I going to stop buying all those lush little embellishments that I haven’t been able to resist in the past? Of course not!! But I am going to try very hard in future to make sure that while the layouts I create are (hopefully) pleasing to the eye, I am not going to get lazy again when it comes to the journalling and telling our story!

and with that in mind and making full use of the aptly named ‘simple stories’ range, my first layout is about my amazing, beautiful, fabulous daughter, Sian. 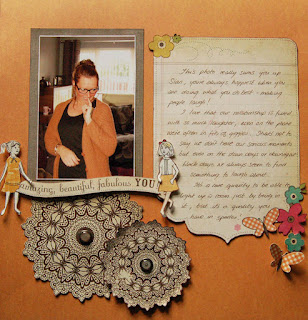 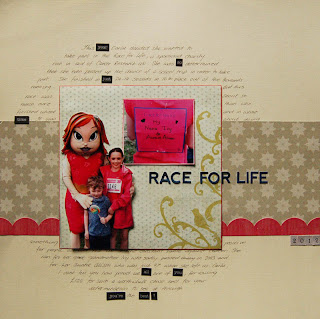 We all have a story to tell, and scrapbooking is such a wonderful way to tell it!