I love sewing on my pages.  Last year, I shared some of the ways in which I do with this post here.
Whilst I was at the recent Sarah’s Cards retreat, I spotted the stitching stencils from the new Amy Tangerine ‘Yes please’ range.  There are two available: an alphabet and the one that I bought, a set of shapes.

I initially thought that I didn’t need them as I have made my own stencils in the past but after realising what came inside the kit and weighing that up against the cost (only £8.99), I decided that it was too good value to miss.
The kit includes two plastic stencil sheets featuring 15 designs, a pricking tool and mat, as well as three different threads and needles.  Everything you need to get started with sewing on your layouts. 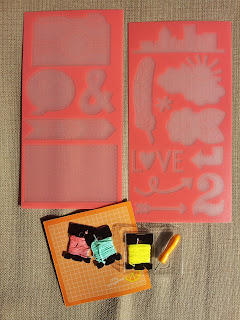 The kit is very easy to use: lay the stencil onto where you want the stitching to be and then pierce through the holes in the template. 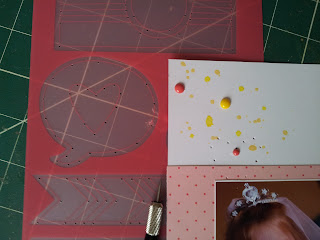 Sew around the pattern to create the embroidered shape. 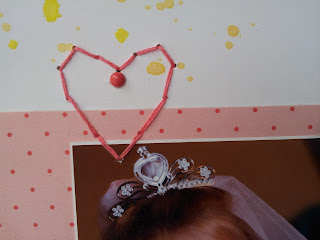 Some of the shapes on the stencils actually have some lines drawn on them to give an idea of how to create a pattern.  For example, I couldn’t understand why there was a rectangle included but on closer examination, I realised that there was a diagonal pattern printed onto the stencil which was far more interesting than a basic border.
My first layout using the embroidery stencil: 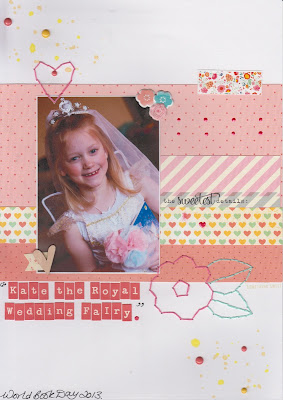 The flower shape perfectly complemented this photo of Evie dressed up as ‘Kate the Royal Wedding Fairy’ for World Book Day.  I also added the heart to anchor the photo to the page and act as a little pointer down towards the photograph.
On my second page, I chose to use the same pink colour thread throughout to tie in with the papers and the girly theme.  I started off by adding the papers and the Elle’s Studio tag before placing the stencil directly onto the tag and piercing the word ‘love’ which neatly fitted across the card.
The ampersand shape was perfect as part of the title and the curly arrow added some interest to the area next to the photograph. 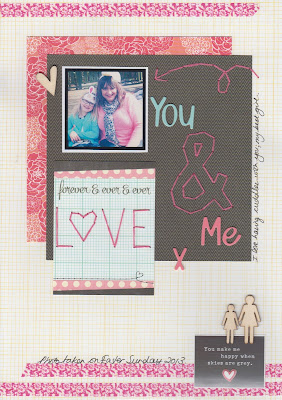 There are still a lot of shapes left that I haven’t tried out yet. I particularly like the speech bubble and the city skyline.  Although I initially couldn’t personally see me using it, I am now a convert, particularly because of the ease of use and immediate results.  And, even after all of that stitching, there is still plenty of the pink thread left.
by Helen